The police booked Sanyukt Vikas Party candidate Vaidh Raj Kishan on Monday night for violating prohibitory orders when he tried to lead a "wedding procession" to the collectorate to file his nomination. 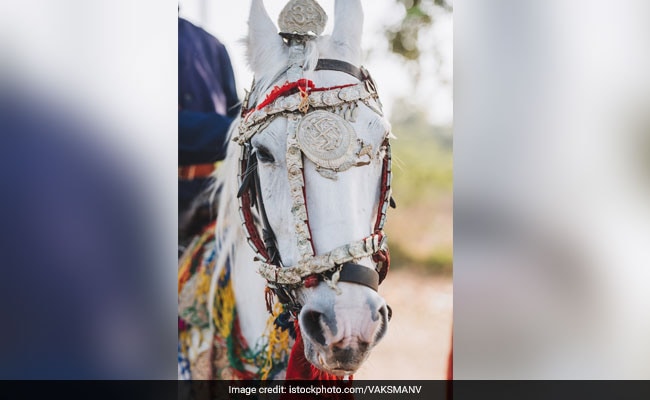 The candidate wore a sherwani, donned a turban and rode a horse. (Representational)

An election candidate who dressed himself as a bridegroom and got atop a horse to file his nomination papers rode right into trouble.

"Mai rajniti ka damad hoon (I am the son-in-law of politics)," Mr Kishan said when asked about his unusual attire.

Mr Kishan said he was dressed as a bridegroom as it was his marriage anniversary on Monday.

He wore a sherwani, donned a turban and rode a horse as he was accompanied by his supporters who danced to Bollywood numbers.

The "wedding procession" was stopped by the police at Sadar Bazar area and Mr Kishan had to dismount the horse to reach the collectorate and file his nomination, Mr Tanwar said.

This is not the first time when this candidate tried an unusual way to file his nomination papers.

In 2017 Uttar Pradesh Assembly elections, Mr Kishan had arrived on a funeral bier to file his nomination.