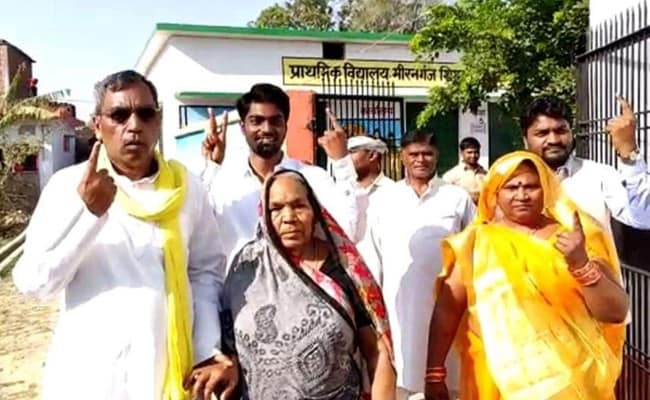 Elections 109: OP Rajbhar and his family show their inked fingers after casting their vote

The BJP's Uttar Pradesh ally Om Prakash Rajbhar, sulking for months, did not spare the party on the last day of voting for the national election. Asked who would win, the state minister picked the opposition alliance of Akhilesh Yadav and Mayawati and "predicted" that the BJP would be limited to 15 of Uttar Pradesh's 80 seats.

"No party will get a majority in these elections. But in Purvanchal (eastern Uttar Pradesh), I feel that the mahagathbandhan will get a massive victory," OP Rajbhar told reporters after casting his vote in Ballia on Sunday.

Mr Rajbhar's Suheldev Bharatiya Samaj Party (SBSP), despite being in the BJP-led government in Uttar Pradesh since 2017, has fielded candidates in 39 seats in eastern UP, including in Prime Minister Narendra Modi's constituency Varanasi.

Mr Rajbhar had unilaterally declared earlier this month that the alliance was over. "I resigned as minister on April 13. It is up to the BJP to decide whether to accept or reject it. I have nothing to do with the government now," he told reporters on May 6.

Since last year, Mr Rajbhar had made it clear that he was not happy and felt "ignored" by the BJP, specifically Chief Minister Yogi Adityanath.

The SBSP has been upset with the BJP for not giving it enough seats to contest in eastern UP, which is the party's area of influence. In April, he dramatically marched into Yogi Adityanath's home in Lucknow at 3 am with his resignation letter and demanded to see him. He left when told that the chief minister was sleeping. The party managed to placate him and stop him from storming out of the coalition.

His words today spell trouble for the BJP, given that the Rajbhars constitute 20 per cent of the Purvanchal population and are regarded as the second-most politically dominant community after Yadavs in eastern UP.

"Without our support the BJP will suffer losses in at least 30 seats in Purvanchal. It is losing Balia, Gorakhpur and Ghazipur seats," Mr Rajbhar told reporters.

Mr Rajbhar had accused the BJP of misusing his party's name and flag and said he had complained to the Election Commission.