BJP's Anupam Hazra said he was paying a "courtesy visit" to Trinamool Congress's Anubrata Mondal, who recently lost his mother 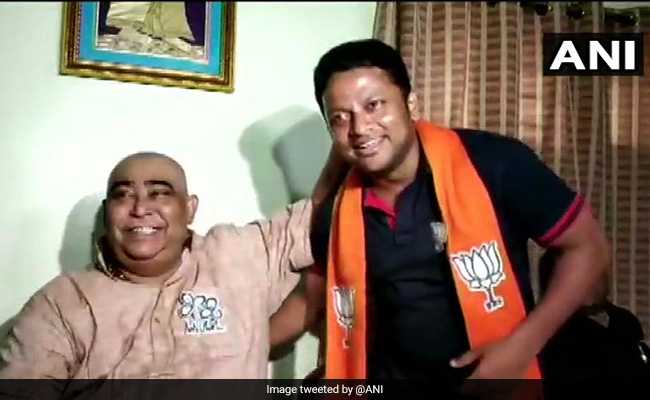 Anupam Hazra had won the 2014 election from Bolpur as a Trinamool candidate.

A BJP candidate in trouble after meeting with a Trinamool Congress leader has alleged that he was tricked and the media had been called before his arrival to create a false impression. Anupam Hazra, the BJP candidate from Bengal's Jadavpur, has been asked by the party to explain his lunch meeting with Trinamool leader Anubrata Mondal at Birbhum, where he voted yesterday.

Mr Hazra said he was paying a "courtesy visit" to Mr Mondal, who recently lost his mother.

"When I reached his chamber at the Trinamool office, I saw mediapersons there. It was planned. I did not realise the dirty politics. It was a plot by them to create confusion among Jadavpur's BJP workers and demoralise them," claimed the BJP candidate.

"I am not politically savvy enough to realise how politics is practised even over the death of a person," he said.

The meeting embarrassed the party on a day Prime Minister Narendra Modi, at a rally in Bengal, declared that "40 Trinamool legislators" are in touch with him and ready to leave Chief Minister Mamata Banerjee's party.

Mr Hazra had won the 2014 election as a Trinamool candidate. He joined the BJP just last month after being expelled from the Trinamool for "anti-party" activities. His Monday meeting set off speculation of his return to his former party. His response to questions on a possible homecoming only fueled more talk: "Only time will tell."

Anubrata Mondal said his former party man had "made a foolish mistake" and left the party. His father is a friend of mine. If he accepts his mistake, he may come back to us. I can make him MP again. I can speak to Mamata Banerjee about it," the Trinamool leader said.

The BJP's Bengal chief Dilip Ghosh said on Mr Hazra's meeting: "He has said it was a courtesy visit. But it would have been better had he met Anubrata Mondal on some other day. In our party, we have discipline and we all have to maintain that."

Yesterday, PM Modi had said at a rally in Serampore near Kolkata: "Didi, on 23 May, the day of results, the lotus will bloom everywhere and your MLAs will leave you and run. Even today, Didi, 40 of your MLAs are in contact with me".

The Trinamool today complained to the Election Commission.