Lok Sabha elections 2019: "Not a single seat should go to the people who were involved in corruption in Maharashtra," Amit Shah said 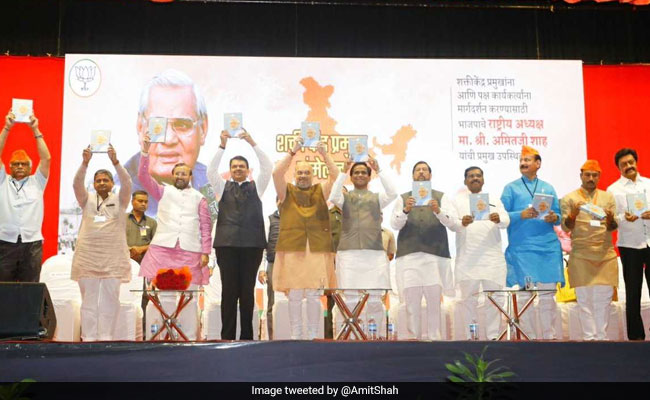 Once termed as possible allies, especially after the 2014 elections in Maharashtra when the Nationalist Congress Party (NCP) offered support to the BJP, the two parties are now taking potshots at each other after the Congress and the NCP firmed up an alliance in the state.

The comments came at a BJP gathering in Pune, considered a base of the NCP.

Amit Shah took a swipe at Mr Pawar, saying, "I want my party workers to win me 45 seats from the state, and to achieve that we will have to win the Baramati seat. If we win Baramati, the number 45 can be achieved."

"Not a single seat should go to the people who were involved in corruption in Maharashtra," the BJP president added.

Devendra Fadnavis said the BJP will have to win all three seats from Pune district this time. Pune has three Lok Sabha seats - Pune, Baramati and Shirur. The fourth seat, Maval, is shared with Raigad district.

While the Shiv Sena and the BJP had contested the last Lok Sabha elections together, it is not yet clear whether the alliance would continue this time even though there are efforts to strike a deal. The Shiv Sena had announced that it will not partner with the BJP in 2019.

The NCP chief also took a swipe at the BJP. "(Nitin) Gadkari is my friend. We have worked together. There is talk about his name being pushed... and because of that I am worried about him," Mr Pawar said, according to news agency PTI.

This was not the first time the NCP has raised speculation that Union Minister Nitin Gadkari's name was being projected as an alternative within the BJP's power centre. Last month, NCP spokesperson Nawab Malik had said Mr Gadkari was also trying to establish himself as an alternative to Prime Minister Narendra Modi.

"Gadkari ji has become outspoken after the assembly polls in the three states (Rajasthan, Madhya Pradesh and Chhattisgarh). It indicates there will be no Modi and BJP government after the polls," Mr Malik had said.