However, many in the AIADMK fear that tying up with the BJP, which has negligible presence in the state, could backfire because it has an "anti-Tamil Nadu" image. 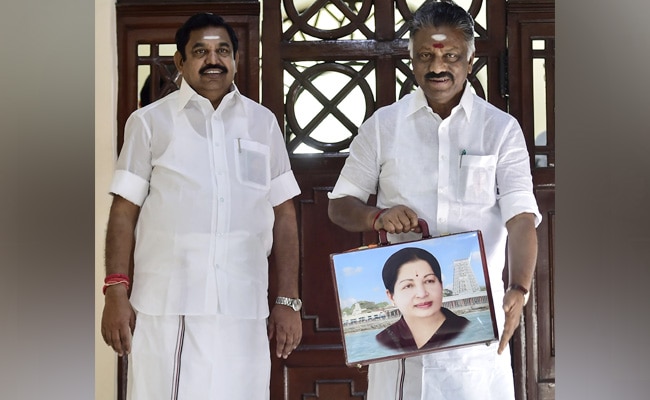 After Jayalalithaa's death, the AIADMK faced difficulties under the Palaniswamy-Panneerselvam leadership.

The AIADMK and the BJP almost finalised an electoral deal for the Lok Sabha polls in Tamil Nadu after late night talks between Union Minister Piyush Goyal and two state ministers, but they are yet to reach an agreement on seat-sharing. "We are seeking 10 of the 39 seats in Tamil Nadu, but the AIADMK is willing to give six. The deal should be done in a couple of days," a senior BJP leader told NDTV.

An AIADMK leader explained why they were reluctant to agree to the BJP's demand. "We told them clearly that things will only work to the DMK's advantage if the BJP is given more seats," he said.

Sources said the AIADMK is holding talks with former BJP partners - including the Desiya Murpokku Dravida Kazhagam (DMDK) and Pattali Makkal Katchi (PMK) - on an individual basis instead of as a BJP-led group. It is also negotiating with former Union Minister GK Vasan's Tamil Maanila Congress.

A formal announcement is expected to be made in a few days. All the allies may come together on a single stage at Prime Minister Narendra Modi's Kanyakumari rally on March 1.

In the 2014 Lok Sabha polls, late AIADMK chief J Jayalalithaa had taken on PM Modi - then the BJP's candidate for the top position - by terming it as a "Modi vs Lady Battle". Her party swept the polls, winning 37 of the state's 39 seats with a vote share of 44.3%. The BJP alliance won just two seats. However, following her death, a weakened AIADMK leadership under O Panneerselvam and E Palaniswamy became worried about a split in votes due to challenges posed by the ousted TTV Dinakaran and the VK Sasikala-led Amma Makkal Munnetra Kazhagam. It is in this scenario that the ruling party - which had been opposing any alliance with the BJP until recently - made a U-turn. A senior AIADMK leader said that his party softened its stand in view of the recent "pro-poor" Union budget.

The DMK-led alliance had won all 39 seats with 57.4% vote share in the 2004 parliamentary elections, leaving the then AIADMK-BJP tie-up with nothing.

Many in the AIADMK fear that tying up with the BJP, which has negligible presence in the state, could backfire because it has an "anti-Tamil Nadu" image. "This is a gamble. The BJP-led alliance did not win even a single seat in the 2016 assembly election, and the vote share of the DMDK and PMK has dwindled," a party leader said.

The alliance offers the BJP a chance to break new ground in the state by riding piggyback on the AIADMK, besides giving it a pre-poll advantage of getting the President's invitation to form the government in case of a hung assembly.