Participating in a discussion on Budget 2019-2020 in the Lok Sabha, the party's M. Thambidurai said that the interim budget, presented by the PM Modi government, was more of an "election manifesto" of the ruling party. 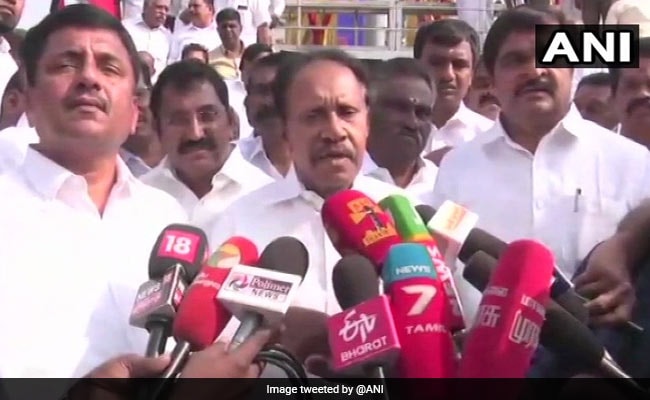 The AIADMK leader hit out at government for decisions like demonetization and GST.

Tamil Nadu's ruling AIADMK, which is being wooed by the BJP ahead of the Lok Sabha polls, on Monday criticized the Narendra Modi government on various fronts including demonetization, GST, unemployment and farm distress.

Participating in a discussion on Budget 2019-2020 in the Lok Sabha, the party's M. Thambidurai said that the interim budget, presented by the PM Modi government, was more of an "election manifesto" of the ruling party.

"The economy is slowly limping back to normalcy even as other vital parameters of our economy deserve some immediate consideration. They (the government) have already submitted five Budgets. The period is over. They cannot announce popular programmes in the Interim Budget.

"If they had been so serious, they could have announced them in the last Budget itself. Now, announcement of these programmes is only meant for elections. It shows it is their election manifesto and not the Budget," he said.

Slamming the government over employment, he said the present rate of unemployment at 6.1 per cent is the highest in the last 45 years.

"They (the Modi government) have completed five years but the rate of unemployment is still very high. Whatever steps the government has taken up, they have failed to solve the problem. In the Interim Budget also, they have missed the opportunity and could not come up with a permanent solution to the problem," he said.

Terming the income support to farmers announced in the Budget as "meagre", he said the government has not given proper attention to this problem.

"They said that they would double the income of farmers by 2022. They have taken up certain measures. But, at the same time, they could not succeed in fulfilling certain promises," he said.

Farmers are facing many problems and the Pradhan Mantri Kisan Samman Nidhi Yojana through specified farmers would get Rs 6,000 yearly was not enough, he said, suggesting that this be doubled to at least Rs 12,000 per annum.

The AIADMK leader hit out at government for decisions like demonetization and hasty implementation of the GST, saying says the two decisions have crippled the economy.

"This year's Budget is all the more significant since it is the chance to redeem the NDA government's image and undo the damage caused to the economy going through abrupt disruption by virtue of demonetization and faulty implementation of the GST, and restore the growth trajectory.

"Both these decisions adversely impacted the unorganized sectors of the economy and hampered the growth trajectory, thereby disturbing the livelihood of several small and medium scale enterprises," he said.

Mr Thambidurai also requested that the Centre release funds for various schemes and arrears of GST to the state, complaining that this hasn't been done despite the AIADMK government regularly sending letters on the matter.

"Former Chief Minister Jayalalithaa was alive then. She came with a memorandum and met the Prime Minister. I was along at that time. Since that time, we have been asking them to release the money, but money is not being released," he said, adding that the pending dues amount to Rs 10,000 crore.