The BJP candidate from Ghatal had threatened to get Trinamool Congress "thrashed like dogs" if they did not stop intimidating voters. 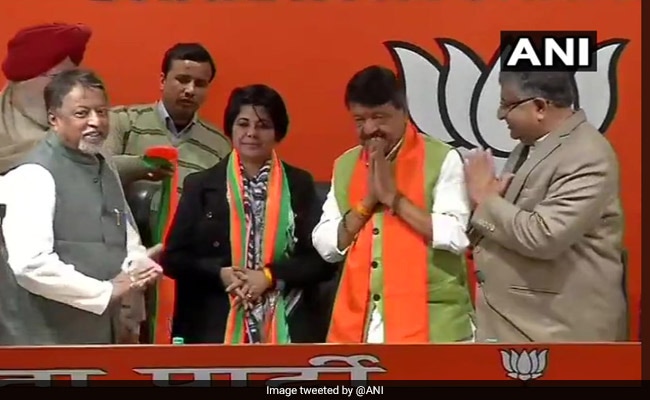 A day after the BJP candidate from West Bengal's Ghatal constituency sparked off a controversy by threatening to "thrash Trinamool Congress workers like dogs", the Election Commission today asked the West Midnapore district magistrate to file a report.

The Trinamool Congress had earlier filed a complaint with the election body.

Bharati Ghosh, a police officer-turned-politician once known for her close ties with Bengal Chief Minister Mamata Banerjee, had openly threatened to source BJP workers from Uttar Pradesh to assault Trinamool Congress workers. "If they (Trinamool Congress workers) try to frighten anyone, we will pull them out of their houses and thrash them like dogs. I will get a thousand boys from Uttar Pradesh and deploy them here, and then you won't be found," Ms Ghosh was heard saying in a video that has been widely shared on social media.

Ms Banerjee responded by asking Bharati Ghosh to not cross the "lakshman rekha" of her patience. "Don't make me open my mouth about you," she said at a street corner meeting on Saturday.

Although Ms Ghosh used to be close to the West Bengal chief minister when she was still the police chief of West Midnapore district, their relationship soured over the years and a number of cases were lodged against her. The Supreme Court stayed the former police officer's arrest earlier this year, following which the BJP fielded her from Ghatal against the Trinamool Congress' Deepak Adhikari.

The controversial comment was defended by the BJP's Sayantan Basu. When asked if it wasn't uncouth to say that Trinamool Congress workers would be thrashed like dogs, he said: "Fine, then we will thrash them like human beings."

Communist Party of India (Marxist) leader Sujan Chakraborty referred to Bharati Ghosh's earlier proximity with Ms Banerjee in a mocking remark. "Why can't you control your daughter? Bharati Ghosh used to call you mother, didn't she?" he asked.

Ghatal will go to the polls in the sixth phase of the Lok Sabha elections, on May 12. The votes will be counted on May 23.