4,000 People Fear This Is Their Last Election Before Their Island Sinks

Lok Sabha Elections 2019: Ghoramara's election officer Swati Bandopadhyay said the island may be lost in two or three years as the rate of erosion accelerates with each monsoon season. Election 2019: Ghoramara has lost about half its size in the past three decades to rising seas.

Residents on Ghoramara fear that the votes they cast on Sunday in the national election may be the last before their island sinks into the Bay of Bengal -- a victim of climate change's growing toll.

About 4,000 people, including poor fisherman Goranga Dolui, were on the electoral list for the island in the Sunderban delta.

"Those who could, have left already. How will the poor like me leave? We hope the government will help us start a new life," he told AFP.

Ghoramara is now about four square kilometres having lost about half its size in the past three decades to rising seas. 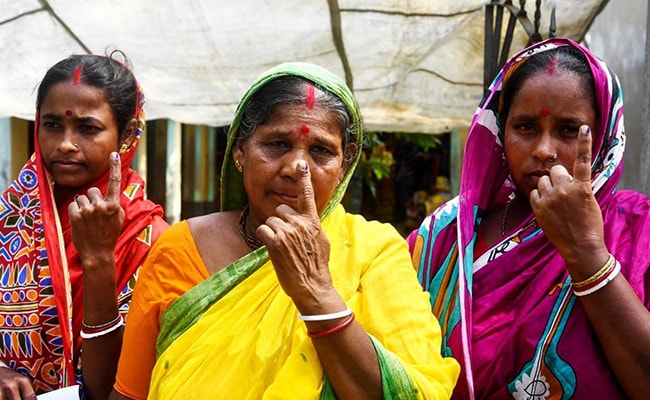 Women voters show their ink-marked fingers after casting their vote in the Ghoramara island, around 110 km south of Kolkata. (AFP)

Ghoramara's voters could still have a role in Prime Minister Narendra Modi's bid for a second term. The BJP has campaigned aggressively across West Bengal state and the result in the local constituency is on a knife edge.

But Dolui is pessimistic about his vote and the results to be announced on May 23 changing the future of the island which is only connected to the mainland by a one-hour ferry ride.

"We will keeping living here until we can't anymore," he said.

Ghoramara's election officer Swati Bandopadhyay said the island may be lost in two or three years as the rate of erosion accelerates with each monsoon season.

"People know this natural process is unstoppable and are gradually moving to the mainland," she added.

Thousands of Ghoramara residents have moved in recent years to Sagar, a bigger island in the delta, or Kakdwip on the mainland. But several islands surrounding islands are threatened.

PM Modi held one of his mega election rallies on the West Bengal mainland last week where he talked about security. The environment, however, has not featured in the election battle between the Prime Minister and Congress chief Rahul Gandhi. Ghoramara is not connected to the country's electricity grid. (AFP)

There was little talk of the notoriety of New Delhi and 13 other Indian cities among the world's 15 cities with the most polluted air.

"Both major parties have sidelined discussion of the environment during the campaign," Aarti Khosla, director of Climate Trends, a New Delhi-based initiative on climate change and clean energy told AFP.

"Whilst the public across the world is generating awareness on environmental issues, it is clearly missing in India."

Critics say the lack of debate on the environment has also clouded discussion on the key areas of agriculture, jobs, water supplies and migration.

Retired school teacher Satish Chandra Jana, 75, has lived all his life on Ghoramara but is despondent.

"We are struggling to live here and have even constructed a home on Kakdwip," he told AFP, sat on the deserted village square.

"I just don't feel like leaving this place. My heart and life story is connected to this island," Jana added.

The younger generation cannot afford to be as nostalgic as Jana.

Ghoramara is not connected to the country's electricity grid and relies on unreliable solar energy for power. The disappearing farmland is taking jobs with it.

Tapas Kumar Sasmal, 50, a retired soldier who was born on Ghoramara and returned there to vote, said only about 10 percent of the original inhabitants remain.

Many who lost their land are now labourers on the mainland. "Life is tough," he told AFP.

"Some officials say the island will be gone by the next election. I feel it could happen tomorrow as we are at the mercy of natural disasters," Sasmal said.

"Everyone wants a safe life," said Khushbano Bibi, 41, who was busy cleaning poultry feed outside her small cottage. "We worry all the time that the sea may come."

"If the government helps, we will move," she said, while adding that she was pessimistic that anyone in power is listening.