"Will Remain In Congress Throughout My Life": Shakeel Ahmad

Shakeel Ahmad said the sole purpose of the alliance was to defeat the BJP, but in Madhubani the ticket was given to a weak candidate of a new party. 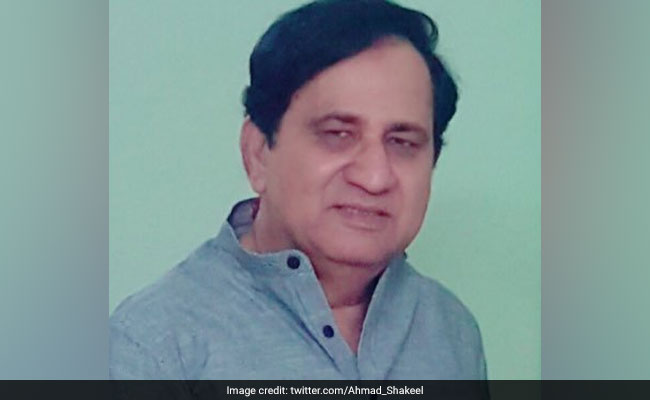 Shakeel Ahmad was suspended by the Congress earlier this week (File)

Former Union Minister Shakeel Ahmad, suspended by the Congress for contesting the Lok Sabha elections as an Independent from Madhubani, has said the party's action against him was harsh and that he contested the polls as the candidate of the Grand Alliance was "weak" too defeat the BJP.

He also alleged that "people brought from outside" were given tickets on some seats.

Mr Ahmad said the sole purpose of the alliance was to defeat the BJP, but in Madhubani the ticket was given to a weak candidate of a new party. "The candidate who was put up by a totally new party was too weak to contest against the BJP. So I decided to contest independently," he said.

Mr Ahmad, a former lawmaker from Madhubani, said that he had information that the state Congress leaders who were negotiating with the Rashtriya Janata Dal (RJD) did not seek this seat "under the influence of an RJD leader". However, Congress President Rahul Gandhi tried at the eleventh hour to get the seat for the party but it was too late by then.

He also said that he was suspended, not expelled, from the party and that he had not left the Congress. "I was in Congress, I am in Congress and I will remain in Congress throughout my life," he said.

Mr Ahmad also said that the RJD had put up a candidate in Chatra in Jharkhand against the common candidate of the alliance in the state.

He said he had requested the party that he should be given the party symbol or its support to fight as an Independent. "I did not get support and was suspended on the eve of the polling day," Mr Ahmad said.

He also said the party had a right to take action. "But in these circumstances, when other partners of the alliance are openly going against the alliance ethos and putting up candidates directly and indirectly, it looks harsh. And that too on the eve of polling day," he said.

Asked if the suspension had damaged his prospects, he said there was a mixed response.

"It had a little bit of demoralising effect on my well-wishers, but it was reported in the media that it was done under pressure from (RJD leader) Tejashwi Yadav. So certain sections of the society became sympathetic towards me," he said.

Asked about his chances of winning, Mr Ahmad said he was not in the habit of making tall claims. "All I can say at this juncture is that I am in the contest," he said.

The Congress is contesting the Lok Sabha polls in Bihar as part of the Grand Alliance which includes the RJD and the Vikassheel Insaan Party (VIP), among others.

In Madhubani, the Grand Alliance candidate is Badri Purve of the fledgling VIP.