Election 2019: Rajnath Singh slammed the West Bengal government for incidents of political violence during elections and asked Mamata Banerjee to "own up" responsibility for them. 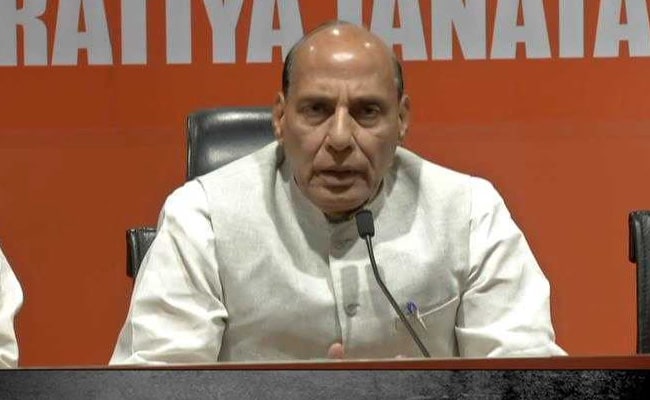 The BJP Tuesday attacked the West Bengal government over incidents of political violence in the state, with Home Minister Rajnath Singh holding Chief Minister Mamata Banerjee "responsible" and alleging that anarchy existed there.

The party also targeted Ms Banerjee over the arrest of its youth activist Priyanka Sharma for sharing a meme of the chief minister, and Union minister Arun Jaitley likened her to a dictator who does not like people laughing at her.

"Humour, wit, sarcasm survive in a free society. They have no place in autocracies. Dictators laugh at people. They don't like people laughing at them. Bengal, today is a case in point," mr Jaitley said.

The Supreme Court on Tuesday directed immediate release of Priyanka Sharma on bail and asked her to tender a "written apology" at the time of her release from jail for sharing the meme.

At a press conference, Mr Singh in reply to a question, said freedom of speech does not mean "abusing" somebody, but added to another question that all sorts of pictures depicting leaders, including him, are put out routinely.

On another query about the court asking her to apologise, he said it can be challenged.

Rajnath Singh also slammed the state government for incidents of political violence during elections and asked Ms Banerjee to "own up" responsibility for them.

"Law and order is a primary responsibility of a chief minister. She is unable to stop it... There is anarchy. I hold the state government responsible," he told reporters.

He, however, added that the centre can do little in the matter and it was for the Election Commission to take cognizance.

Rajnath Singh also lashed out at Mamata Banerjee for not answering Prime Minister Narendra Modi's call to her when Cyclone Fani hit the region, saying this might have been the first time when a chief minister did not respond to a PM's call.

"If a chief minister behaves like this, then what will happen to India's federal structure, its constitution," he asked.