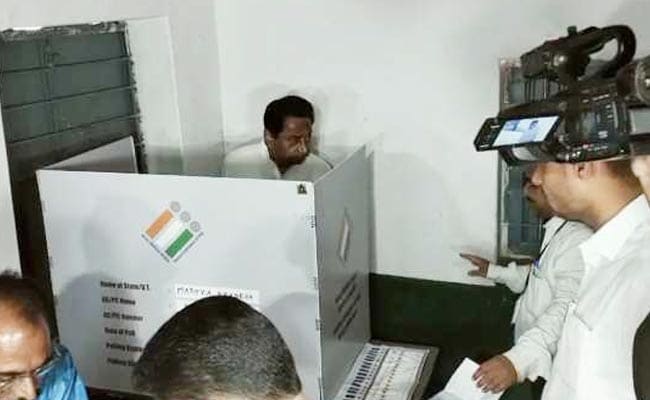 Madhya Pradesh Chief Minister Kamal Nath was one of the early voters who turned up on Monday to exercise their voting rights in Chhindwara, where Mr Nath's son Nakul Nath is a Congress candidate. Things, however, got awkward when power tripping forced the leader to use flash lights of the cameras to cast his vote.

The incident took place at 8am at a polling booth in Shikhapur area. As the Chief Minister his wife, son and daughter-in-law arrived, power supply tripped for some time. Later, Kamal Nath was seen voting as the camera persons beamed flash lights to capture the visuals.

An official said it took around half-an-hour to restore power supply.

When asked, Kamal Nath said the matter would be looked into.

The Chief Minister has won in Chhindwara nine times. He is also the sitting parliamentarian. He is contesting assembly elections from the city as he would have to be a member of the assembly to remain the Chief Minister of the state. His party has fielded his son Nakul Nath as its national election candidate from its stronghold.

Nakul Nath, who is making his political debut in these elections, has been pitted against BJP's tribal leader and former legislator Nathan Shah Kavreti.

The results will be declared on May 23.