AAP chief Arvind Kejriwal has welcomed the announcement with a tweet. 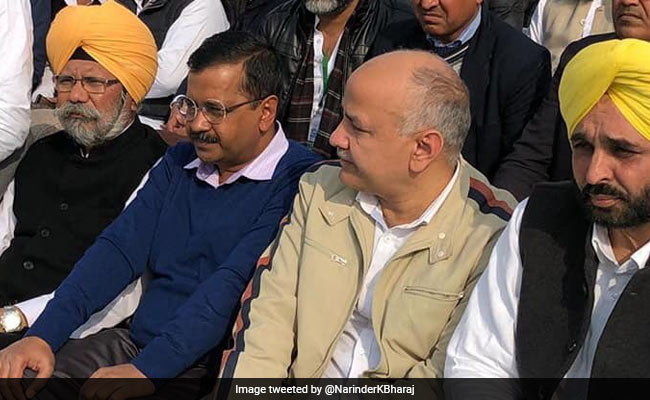 Arvind Kejriwal, Manish Sisodia and Bhagwant Mann at the rally.

"At Barnala rally, Bhagwant Mann's announcement - on January 1, he has resolved not to touch alcohol ever. From the stage, he made the promise before his mother and the people of Punjab that he would apply his tan, man, dhan (body, soul and mind) in the service of Punjab," Mr Sisodia tweeted.

Mr Mann's alleged "drinking" habit had made him the target of the opposition, and even his own party leaders.

The parliamentarian's former party colleague in Punjab-- political satirist Gurpreet Singh Waraich-- attacked him in 2017, questioning the party's decision to appoint him the state unit chief.

"How laughable is the condition 'consume no liquor' to make Bhagwant the convener? How can they have a condition 'don't drink now', because that itself acknowledges that he is a drunkard,"Mr Singh had said after resigning from the party in 2017. He followed it up with a further revelation: "Bhagwant himself said 'remove me if I drink again'".

During a parliament debate the same year, Prime Minister Narendra Modi also took a savage dig at the leader. PM Modi was quoting Charvaka philosophy to make a point when he turned to Mr Mann, who has recently faced allegations of arriving drunk to public meetings during his campaign. "As long as you are alive, have fun. Karz Karo aur ghee piyo (take loans and have as much ghee or clarified butter as you want). In those times, there were values, they talked about ghee. Bhagwant Mann would ask them to drink something else," he quipped.

Mr Mann had denied having the problem. "Those are allegations (of alcoholism) by rival parties. They think a lie told 100 times can become the truth," he told NDTV in 2017.

Meanwhile, AAP chief Arvind Kejriwal has welcomed the announcement. "Not everyone can make such a big promise to people nowadays. May god give him the strength to keep serving people the way he is," he tweeted today.