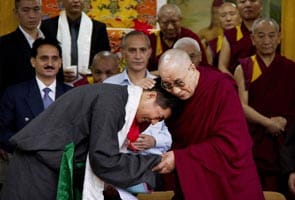 New Delhi: Lobsang Sangay, political successor to the Dalai Lama, was sworn-in as Prime Minister of the Tibetan government-in-exile at a public ceremony in Dharamshala on Monday.

Mr Sangay, 43, was administered the oath of office at a ceremony in the central courtyard of the main Tibetan temple, opposite to the office of the Dalai Lama. He succeeds Samdhong Rinpoche as the Kalon Tripa or the Prime Minister of the Central Tibetan Administration.

The oath will be administered by Ngawang Phelgyal, the Chief Justice Commissioner, in the presence of the spiritual leader of Tibetans -- the Dalai Lama.

Mr Sangay will be the first to take charge of the office after the Dalai Lama announced his decision to devolve his political authority to the elected leadership. These changes were ratified by the Tibetan Parliament in May.

Born in Darjeeling and educated in Delhi, Mr Sangay pursued higher studies in the US and was a senior Fellow at the Harvard Law School before being elected as the Kalon Tripa in April.

Besides pursuing law, he also organised conferences and seminars which were attended by several Chinese scholars during his 16-year stay in the US.

In an interview to NDTV, on the eve of his inauguration Mr Sangay acknowledged that the Dalai Lama was irreplaceable but said that he represented the restless "young Tibet."

Promoted
Listen to the latest songs, only on JioSaavn.com
Committing himself to the cause of non-violence he voiced his frustration at being a Prime Minister without a country.

''I wish the world would understand what China can do, what they are doing to us. I don't know what it is like to have a country, for a week, month even a day." (With PTI inputs)