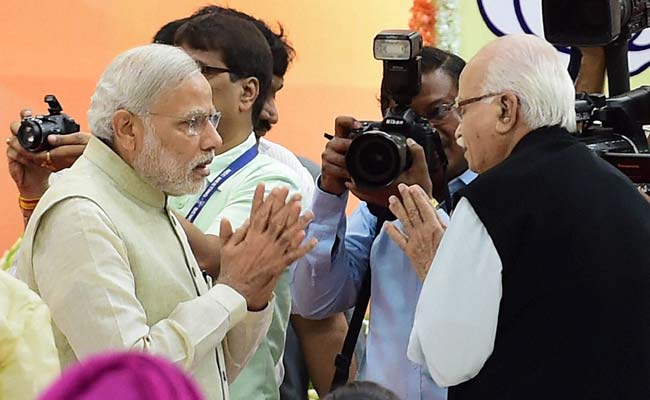 Prime Minister Narendra Modi reportedly reached out to senior BJP leader LK Advani who refused to speak at a party conclave in Bengaluru today. Sources have told NDTV that the Prime Minister praised Mr Advani for his guidance to the party at the national executive meeting where the veteran, in a first since the BJP was born 35 years, did not deliver his traditional valedictory address while being present.

Earlier in the day, Mr Advani had turned down party president Amit Shah's request to address the two-day conclave which concluded day.

While his refusal to make a speech is seen as a signal of his deep disillusionment, sources said top leaders were also wary of what the sidelined 87-year-old would say.

Last year, after Mr Shah took over as BJP chief, he effected a major organisational revamp, removing senior leaders like Mr Advani and Murli Manohar Joshi from the party's top decision-making group, the parliamentary board, and assigning them to a "Margdarshak Mandal' or guidance committee. Also a member of this committee is former Prime Minister Atal Bihari Vajpayee, who has been ill for many years now.

These leaders were members of the parliamentary board ever since the party was launched in 1980 and the move was seen as a signal that the Vajpayee-Advani era of the BJP was over.

The guidance committee has played no role in decision-making. It was not consulted in framing strategy for state elections, including when the BJP decided to project Kiran Bedi as its chief ministerial candidate in Delhi or when it decided to strike an unlikely alliance with the People's Democratic Party in Jammu and Kashmir.

Those gambles did not pay off - the BJP was trounced in Delhi and is struggling to maintain its partnership with the PDP in Jammu and Kashmir - and there is now a question of accountability. Even the party's ideological mentor, the Rashtriya Swayamsevak Sangh has voiced concern.

Sources said there were apprehensions that Mr Advani could raise hard questions on such decisions in his address.

Promoted
Listen to the latest songs, only on JioSaavn.com
But Mr Advani, who was once a vocal critic, has lately used silence to show his disapproval. He has attended Parliament every single day, but has never spoken on the floor of the house.

The last time he did not make his traditional address to the national executive was in 2013, when he skipped a meet in Goa to register his protest against a move to promote Mr Modi.