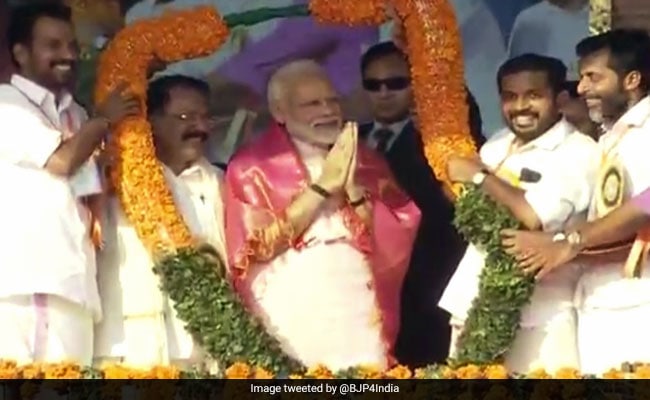 Prime Minister Narendra Modi is visiting Tamil Nadu and Kerala today. In Tamil Nadu, PM Modi laid the foundation stone for an All India Institute of Medical Sciences (AIIMS) in Madurai. He also inaugurated super-speciality blocks at medical colleges in Rajaji, Thanjavur and Tirunelveli. PM Modi also addressed a public rally in Madurai. PM Modi's visit to Tamil Nadu was marred by a war of 'hashtags' on the micro-blogging site Twitter. #GoBackModi was trending on Twitter before his visit to the southern state. Thousands of other tweets, meanwhile, welcomed PM Modi to Madurai and thanked him for setting up AIIMS in the city. Hashtags like #MaduraiThanksModi and #TNWelcomesModi too were among the top trends on Twitter.

Here are the Highlights on PM Modi's visit to Tamil Nadu and Kerala:

Jan 27, 2019 18:03 (IST)
On Padma Bhushan Awardee Nambi Narayanan, PM Modi Says:
Jan 27, 2019 18:00 (IST)
Continuing with this, he said
They are also questioning the Election Commission. The entire nation was amused to see a press conference in London, where, on foreign soil India's democratic ethos was questioned.
And, who was spotted in that press conference? A topmost Congress leader. Is this your respect towards institutions and our democracy? Is this what our politics has come to that now, you will even go on foreign soil to undermine the mandate of the people of India.
Congress and Communists talking about democracy is the biggest joke! What is happening in parts of Kerala, where political workers are killed just because their ideology is different from the Communists.
Now, this culture has spread to Madhya Pradesh where BJP workers are being attacked. The mindset of the Emergency still lives on in the minds of many Congress leaders
India's strength is India's democracy. It is from our land that the ethos of democracy always stood strong. Elections will come and go, the nation will remain.
In their dislike for Narendra Modi, the Congress, Communists and their other friends should stop disrespecting institutions and our democratic fabric
In addition to negativity and opposing Indian culture, the Congress and the Communists have one more thing in common. Governments here have filled their own coffers through corruption
In less than three years, so many LDF ministers had to resign! Why? UDF's corruption like Solar Scam are also well known
Jan 27, 2019 17:54 (IST)
He also said:
Jan 27, 2019 17:36 (IST)
Prime Minister Narendra Modi today mentioned the Sabarimala issue in his speech in Kerala's Thrissur. PM Modi blamed the Kerala government for "attacking" the cultural ethos of the southern state. "The people of India are seeing the manner in which the Communist Government of Kerala are disrespecting all aspects of Kerala's culture," he said. He accused the government of "undermining" culture and civilisation.
Jan 27, 2019 17:26 (IST)
"We have moved up from rank 142 to rank 77 in the ease of doing business rankings. India has gone ahead of China in getting FDI," PM Modi said in Kerala's Thrissur.
Jan 27, 2019 17:23 (IST)
"We're very close to our goal to provide a cooking gas connection to every home. Nearly 6 crore poor women have received free cooking gas connection. India's energy needs are growing and so we've sped development of oil and gas infrastructure," PM Modi said in Thrissur. 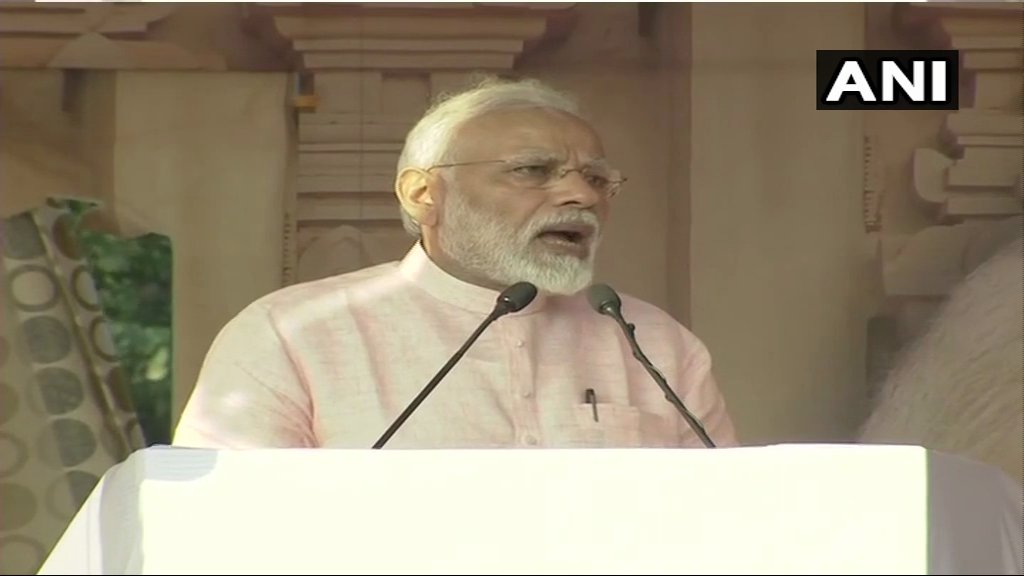 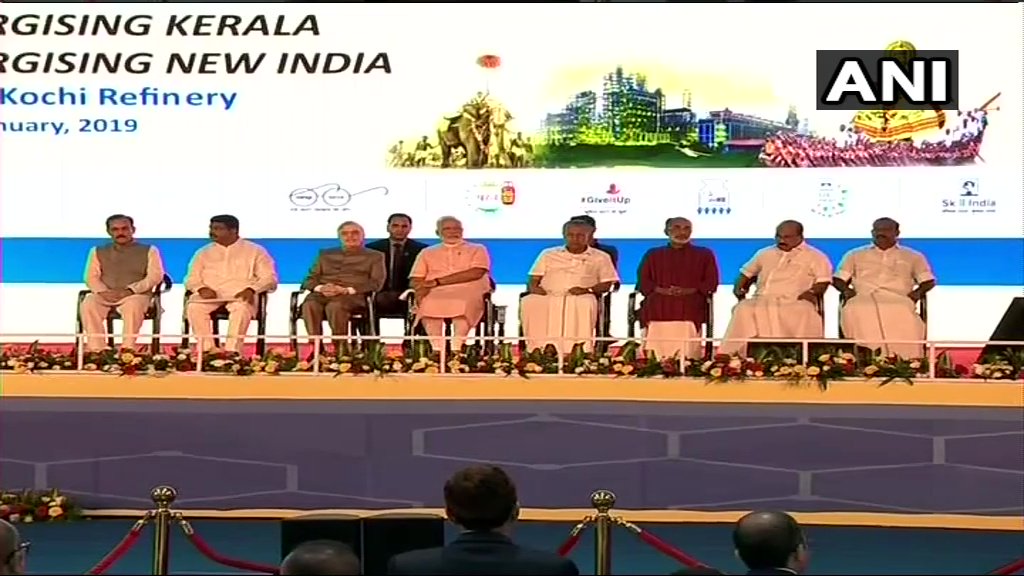 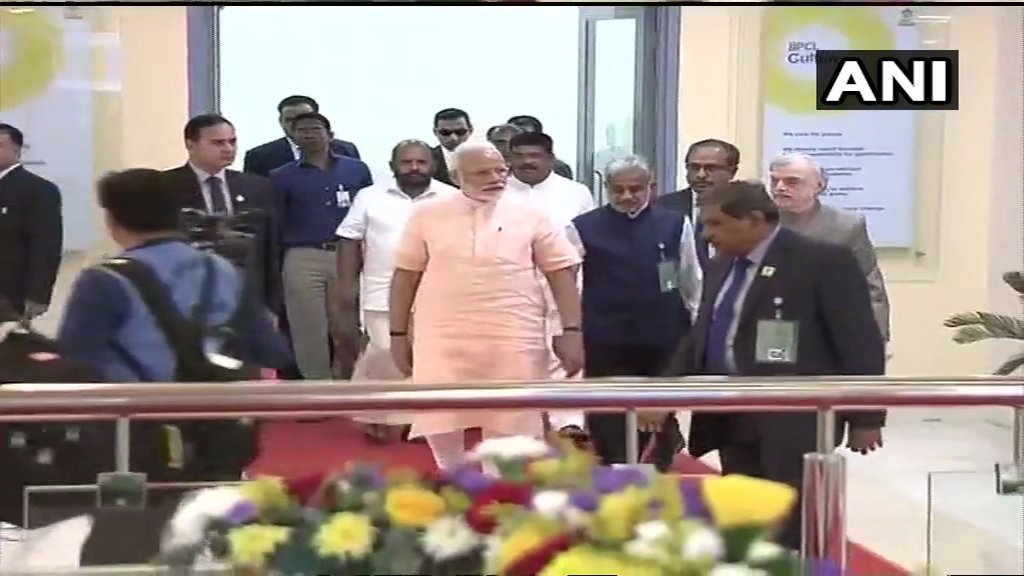 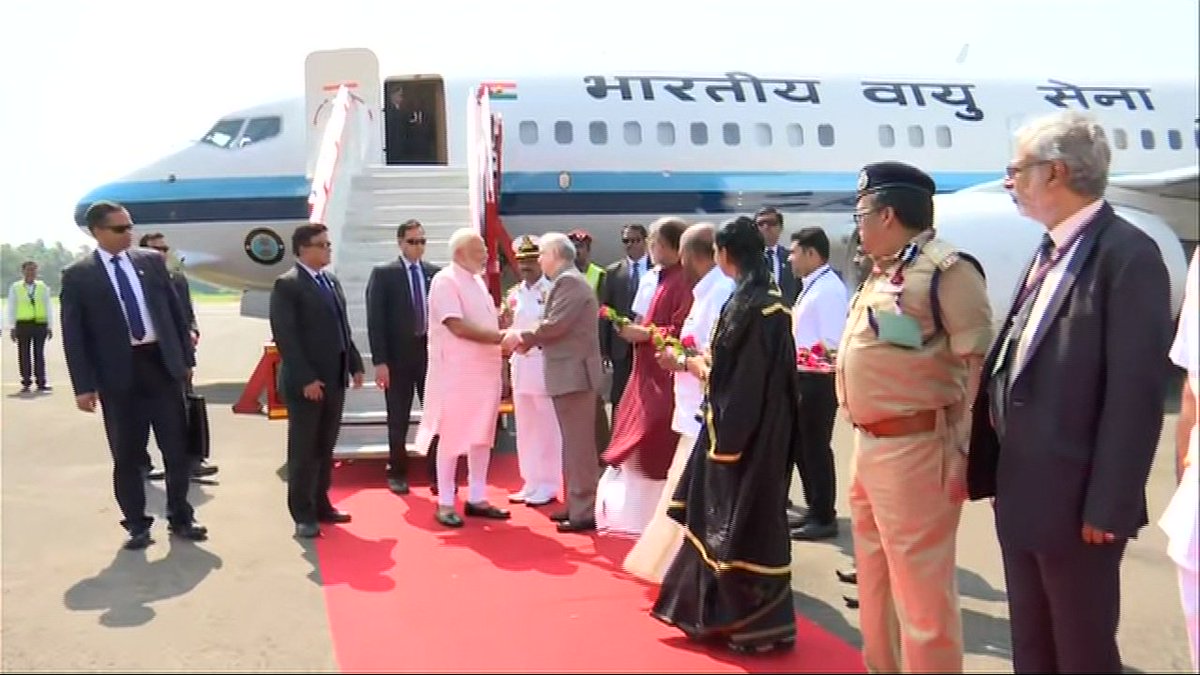 Jan 27, 2019 14:27 (IST)
Prime Minister Narendra Modi today said that over 89,000 people in Tamil Nadu benefited from the Centre's Modicare health insurance scheme. Addressing a public rally in Madurai, PM Modi said that about 1.57 crore people were under the Ayushman Bharat Yojana, or Modicare, in Tamil Nadu. He also said that a sum of Rs. 200 crore has been authorised towards their treatment expenditure.
Jan 27, 2019 13:17 (IST)
In his speech in Madurai, PM Modi took a swipe at the 'Mahagathbandhan', saying opposition parties set their differences aside to remove the "watchman". "They say that keeping aside all other considerations, they must unite to remove this watchman," PM Modi said.
Jan 27, 2019 13:12 (IST)
Addressing a public meeting in Madurai, PM Modi also credited Tamil Nadu for developing the first-high speed train, T-18, in India. The Train-18 is built by the Integral Coach Factory (ICF) in Chennai.
Jan 27, 2019 13:04 (IST)
Citing the new law to provide 10 per cent reservation in education and employment for the poor, PM Modi said that his government was committed providing employment opportunities and education to all segments of our society. "It was with this spirit that recently, we decided to provide 10 per cent reservation in education and government employment, to the poor among the General Category," he said. He added that the 10 per cent reservation will not affect existing quota for Dalits, tribals and others.
Jan 27, 2019 12:57 (IST)
Addressing a public rally in Madurai, PM Modi said Swachh Bharat, or the Clean India campaign, has become a "people's movement". PM Modi claimed rural sanitation in India increased from 38 per cent in 2014 to 98 per cent today. "We have built more than 9 crore toilets in this period, out of which 47 Lakh have been made in Tamil Nadu alone," he said. 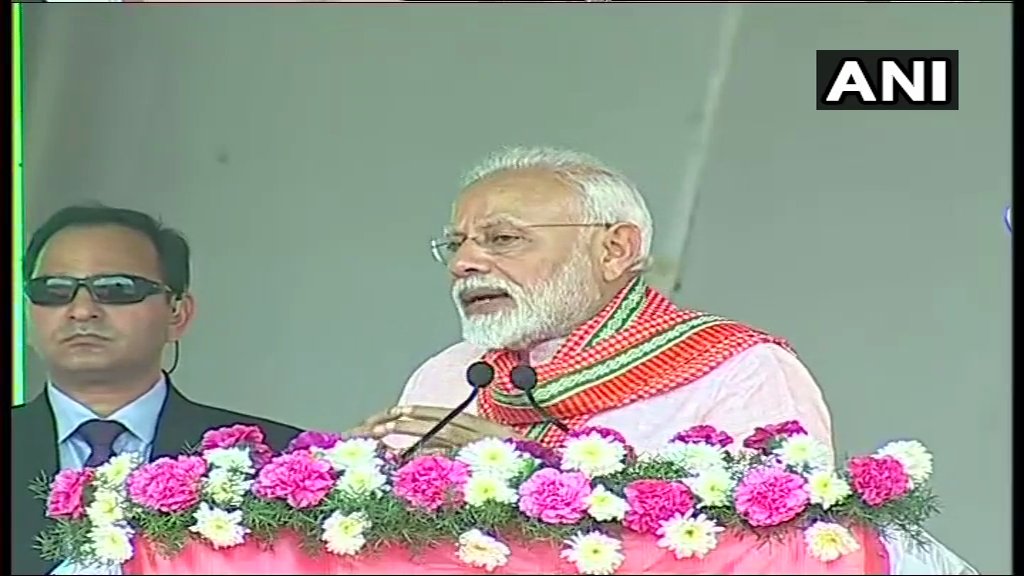 Jan 27, 2019 12:38 (IST)
In Madurai, PM Modi also dedicated 12 passport 'seva kendras'. "This initiative is one more example of improving the "ease of living" for our citizens," he said.
Jan 27, 2019 12:37 (IST)
The Madurai AIIMS was given union cabinet approval in December, 2018. When the Centre announced in its 2014-15 budget that new AIIMS would be set up in various parts of the country, late chief minister J Jayalalithaa had requested one such facility for Tamil Nadu. Following her plea, the Centre announced in the 2015-16 budget that an AIIMS would be set up in the state. After a prolonged process, the authorities zeroed in on the Thoppur near Madurai for locating the AIIMS.
Jan 27, 2019 12:34 (IST)
Chief Minister K Palaniswami thanked the PM Modi for providing the AIIMS facility to Tamil Nadu and urged upon the Centre to set up a medical college at the backward Ramanathapuram district. Deputy Chief Minister O Panneerselvam said AIIMS Madurai would greatly benefit the people of southern backward districts of Tamil Nadu, adding all necessary infrastructure will be developed in the region.
Jan 27, 2019 12:31 (IST)
The super speciality blocks at state-run medical colleges in Madurai, Thanjavur and Tirunelveli would have high-tech diagnostic equipment and facilities including Cath lab. The proposed 750-bed modern AIIMS in Madurai, on its completion, will also offer 100 MBBS seats.
Jan 27, 2019 12:27 (IST)
"It (AIIMS Madurai) will benefit the entire population of Tamil Nadu. The NDA government is giving great priority to the health sector so that everyone is healthy," PM Modi said. 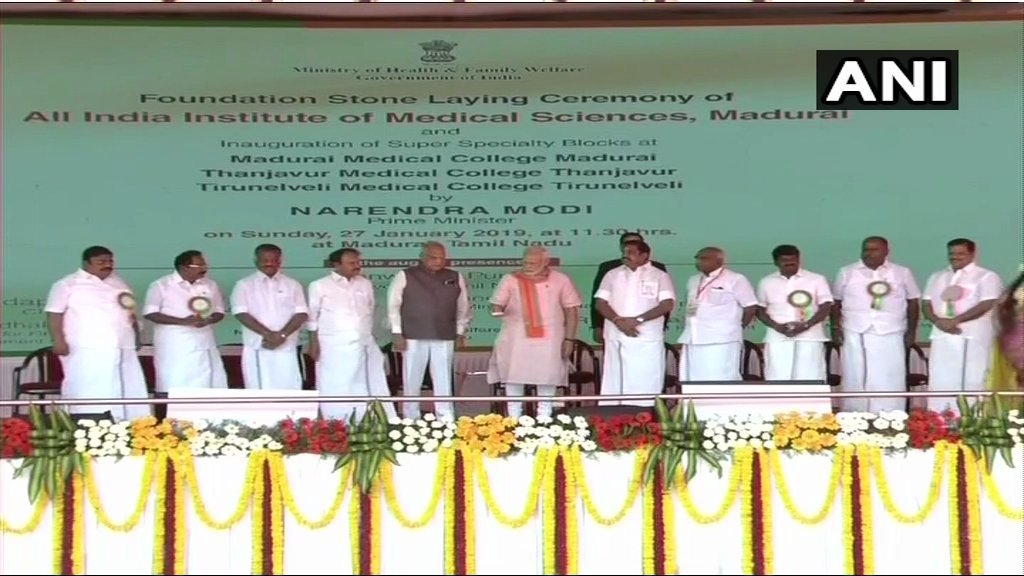 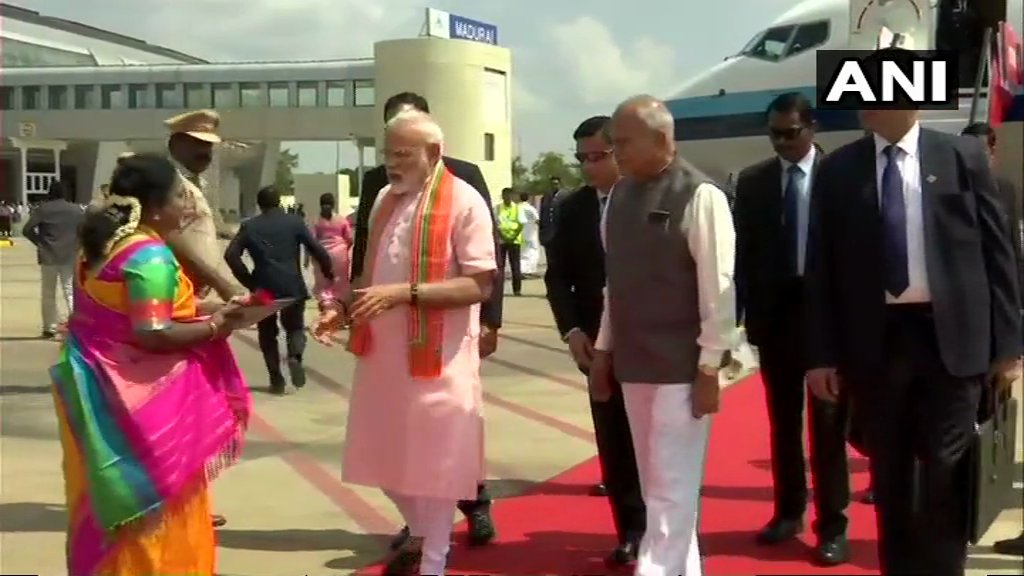 Jan 27, 2019 11:28 (IST)
Marumalarchi Dravida Munnetra Kazhagam chief Vaiko leads protests in Tamil Nadu's Madurai ahead of PM Modi's visit. Releasing black balloons, the protesting party cadres raised slogans against PM Modi, alleging he betrayed the interests of Tamil Nadu on Cauvery and other issues. The MDMK cadres claimed that the Centre had accorded "permission to projects like neutrino and hydrocarbon extraction" which, according to them, would have an adverse impact on the livelihood of the farmers and also affect the common people. 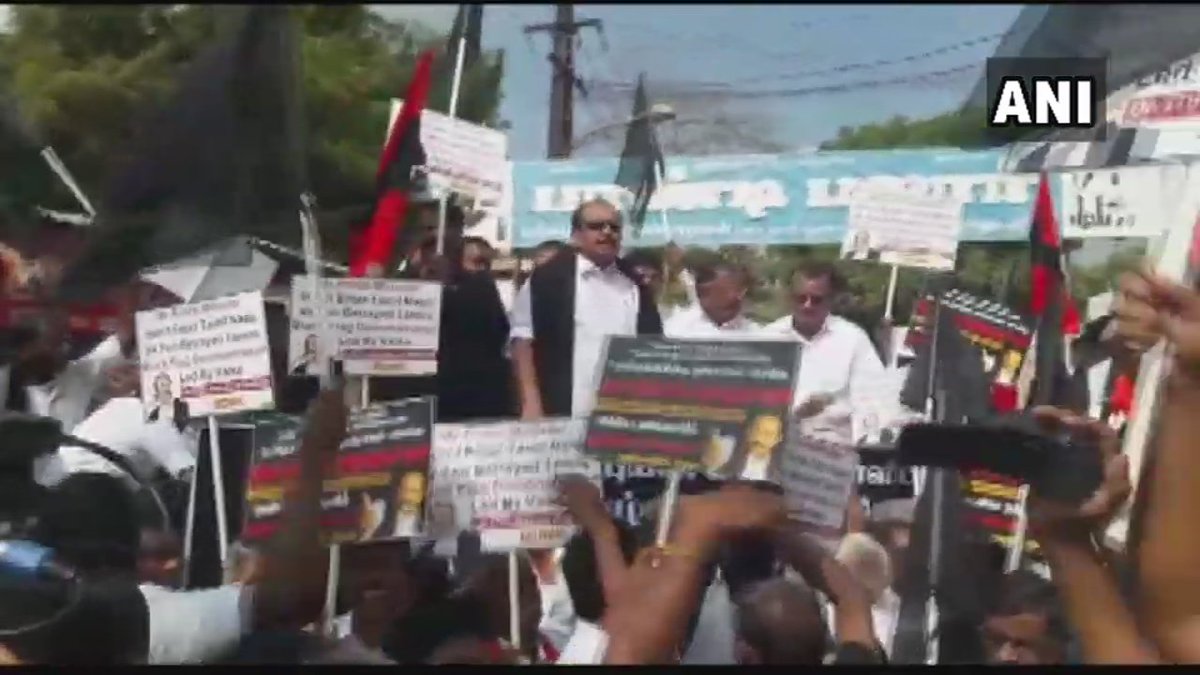 Jan 27, 2019 10:58 (IST)
Prime Minister Narendra Modi, who will arrive in Kerala's Kochi later today, will dedicate Rs 16,504 crore to the southern state when he unveils an integrated Bharat Petroleum Corporation Limited (BPCL) refinery expansion complex. This will be the single-largest investment made by the prime minister in Kerala.
Jan 27, 2019 10:29 (IST)
PM Modi will address a public meeting in Mandela Nagar Ground in Madurai. He will then go on to lay foundation stone of various projects at oil refineries in Kerala. PM Modi will then address a state meeting of Yuva Morcha in Thrissur.
Jan 27, 2019 10:23 (IST)
PM Modi will lay the foundation stone for an All India Institute of Medical Sciences (AIIMS) in Tamil Nadu's Madurai. The new AIIMS will cost Rs 1,264 crore and is expected to go on stream in 2022. Madurai's AIIMS will be a 750-bed hospital with a long-term focus on post graduate and higher education and research. It will have a capacity of 100 MBBS seats and 60 for B Sc (Nursing).
MaduraiGoBackModiPM Narendra Modi