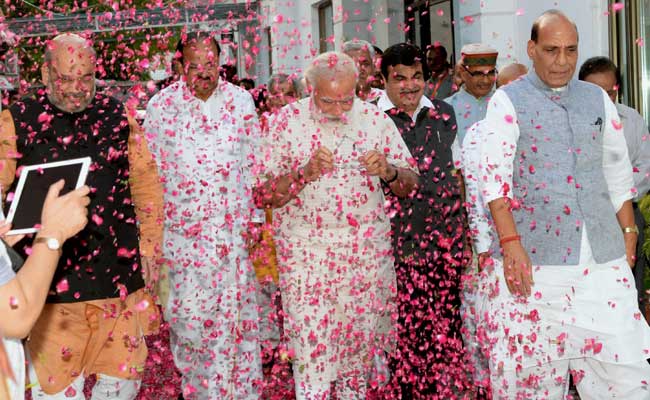 2017 Election results: The BJP has done well in UP, Uttarakhand, Goa and Manipur

The BJP's massive victory in Uttar Pradesh, has been described as a "tsunami". The party, along with its allies, has won 325 of the 403 constituencies in the state, signaling advance celebrations two days before Holi. The BJP has also won 57 of the 70 seats in Uttarakhand. The Congress, however, regained power in Punjab after a political drought of 10 years and comfortably defeated the Aam Aadmi Party (AAP) and the ruling Akali Dal-BJP alliance.

The assembly elections in the five states were considered the first big test for the BJP after Prime Minister Narendra Modi's demonetisation drive, which wiped out 86 per cent of currency from the nation's economy. Not only did the BJP silence its critics in UP, it managed to comfortably dodge the threat posed by the alliance between Chief Minister Akhilesh Yadav's Samajwadi Party and the Congress.

The BJP and Congress are locked in a close contest in the states of Manipur and Goa. Both the states are heading toward hung assemblies as neither party is expected to cross the respective magic marks. In Goa, Chief Minister Laxmikant Parsekar lost in Mandrem whereas activist Irom Sharmila secured less than 100 votes in Manipur's Thoubal against Chief Minister Okrom Ibobi Singh.

Three Chief Ministers, Akhilesh Yadav, Harish Rawat and Laxmikant Parsekar have resigned. Mr Rawat resigned after the Congress was reduced to just 11 seats in the state. Mr Rawat also lost in both the constituencies he contested.

In Punjab, the Congress ended the decade-long rule of the Akali Dal-BJP, reducing them to the third position. The AAP fared poor than their expected tally, but managed to emerge as the second largest party in the state.

Here are the highlights of the fastest and most accurate 2017 election results: 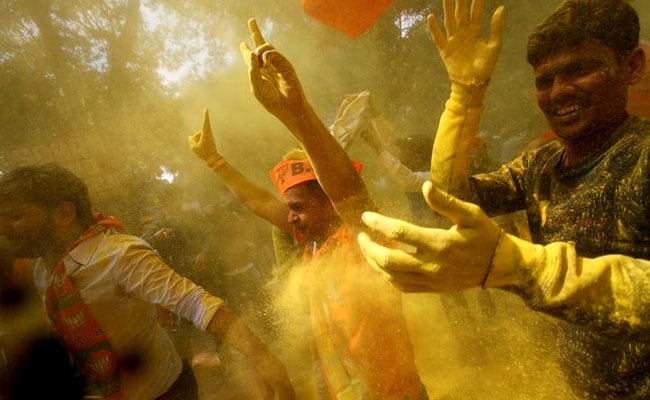 #ResultsWithNDTV | @umasribharti says the BJP saw Ram Mandir not in the "context of elections but as a national sentiment" pic.twitter.com/vCwVr8iA62

#ResultsWithNDTV | What vote share in Uttar Pradesh means for BJP 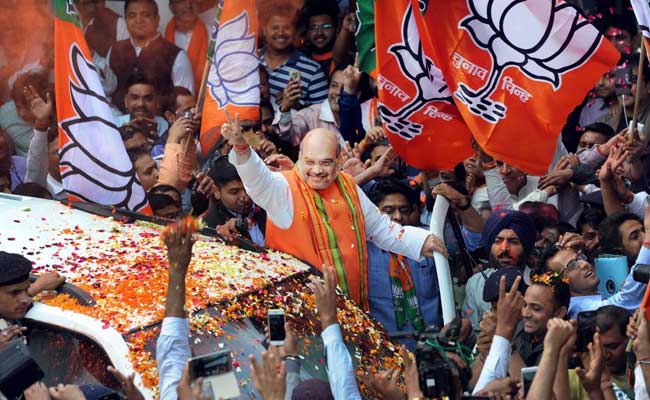 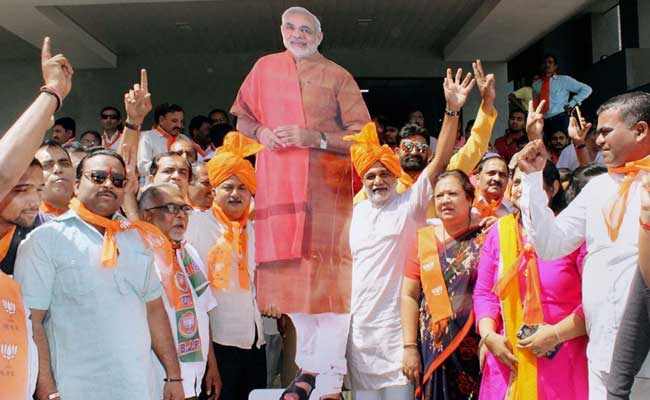 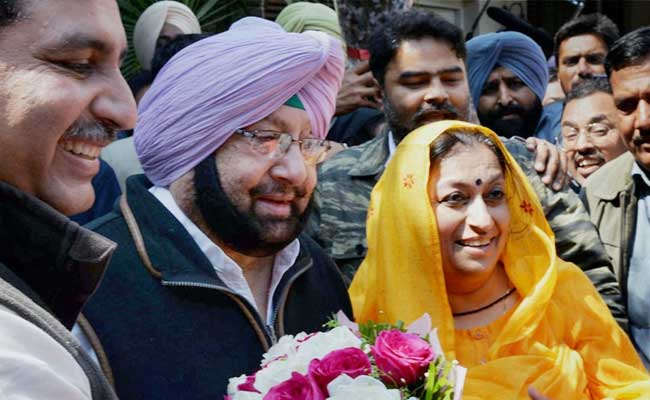 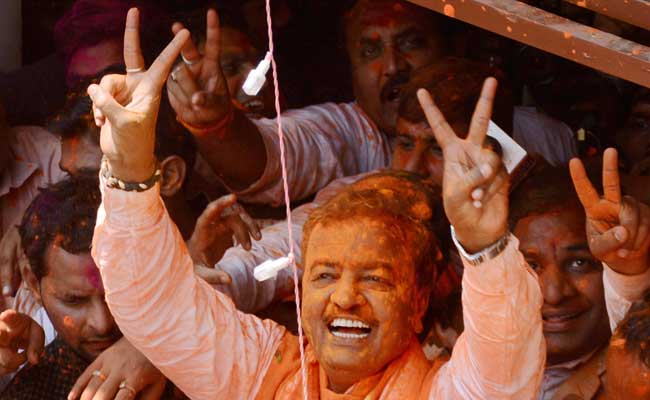 Rang Barse! BJP UP chief Keshav Prasad Maurya celebrates the party's historic win in the state
Mar 11, 2017 17:42 (IST)
Congress's Ashwani Kumar on party's performance in assembly elections: "There is no denying the fact that in a democratic polity leadership cannot be demanded or willed it has to be earned over a period of time... There is no doubt we need to identify many many more people within the Congress party"
Mar 11, 2017 17:09 (IST)
'Long live democracy': PM Modi tweets in response to Rahul Gandhi's congratulatory post
Mar 11, 2017 17:05 (IST)
Uttar Pradesh Chief Minister Akhilesh Yadav:
- I understand samjhane se vote nahi milta, behkane se milta hai
- Some parties have raised questions, they must be investigated
- Our cycle was tubeless
- At least you are smiling in our press conference, you can't even do that in the other one
- We raised the issue of LPG prices, impact of notes ban on cost of farm produce, import of dal but I guess people wanted to hear something else
- Happy with the alliance with Congress. Two youth leaders came together. The alliance will continue.
- I hope the next government does a better job, makes better roads, gives better facilities to the people
- The chance I got to govern for 5 years - I worked only to advance Uttar Pradesh 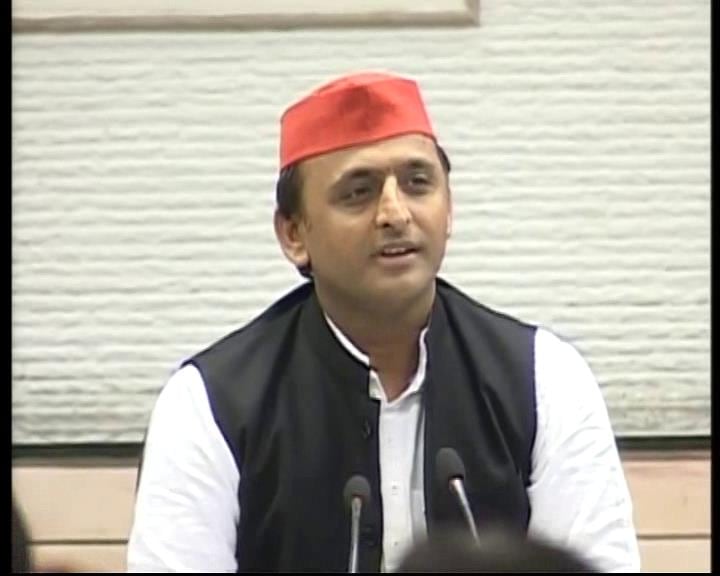 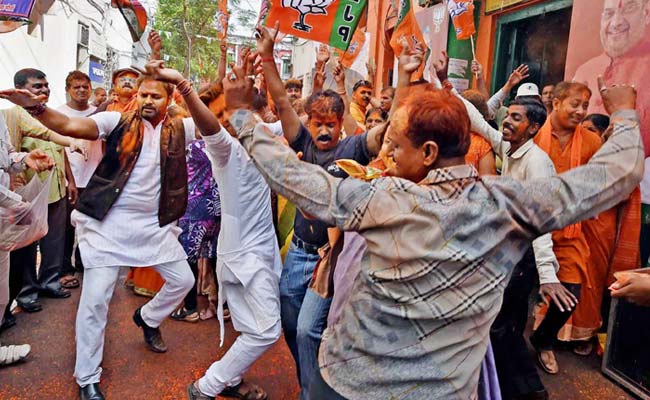 Celebrations continue. BJP workers play Holi after big wins in UP and Uttarakhand.
Mar 11, 2017 16:16 (IST)
Very humbling and overwhelming, says PM Modi on today's huge election wins
Mar 11, 2017 16:13 (IST)
Harish Rawat, after Congress's crushing defeat in Uttarakhand, says "A question I want to raise is how much money can the central leadership of a party spend in a state? I also want to congratulate the "Modi kranti and EVM chamatkar" 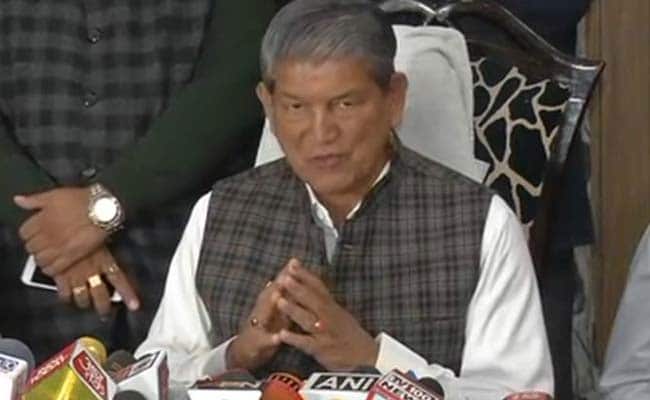 Thank you @narendramodi ji for your good wishes. Look forward to working with you for betterment of Punjab: @capt_amarinder#ResultsWithNDTVpic.twitter.com/Gv0QZnxrAp

BJP has won 6 of 10 seats from Amethi and RB, very happy about that: Amit Shah #ResultsWithNDTV 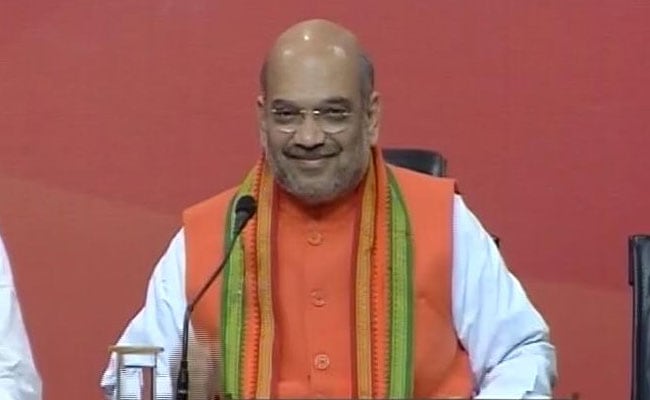 - In four states we are about to form government. We thank the people of the states from the heart
- It is a historic mandate and will give a new direction to the country's politics
- BJP workers have helped us throughout the ups and downs of the elections
- The BJP has got nearly 3/4th majority in UP - possibly the largest since independence
- We also have comfortable lead in Manipur, Goa
- First of all it is a win for the people of these states
- It is also a win for PM Modi's leadership and the hard work of the crores of party workers
- This a stamp of approval for the work of the central government
- Ujjwala scheme, toilets - everything has reinforced PM Modi's agenda for the poor
Mar 11, 2017 15:34 (IST)
Stand by for the man of the moment..BJP chief Amit Shah
Mar 11, 2017 15:30 (IST) 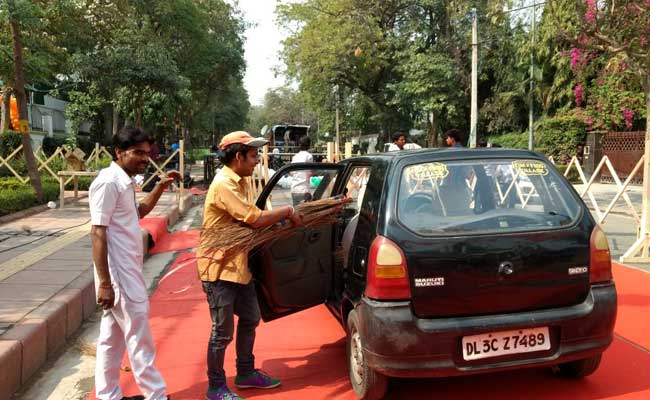 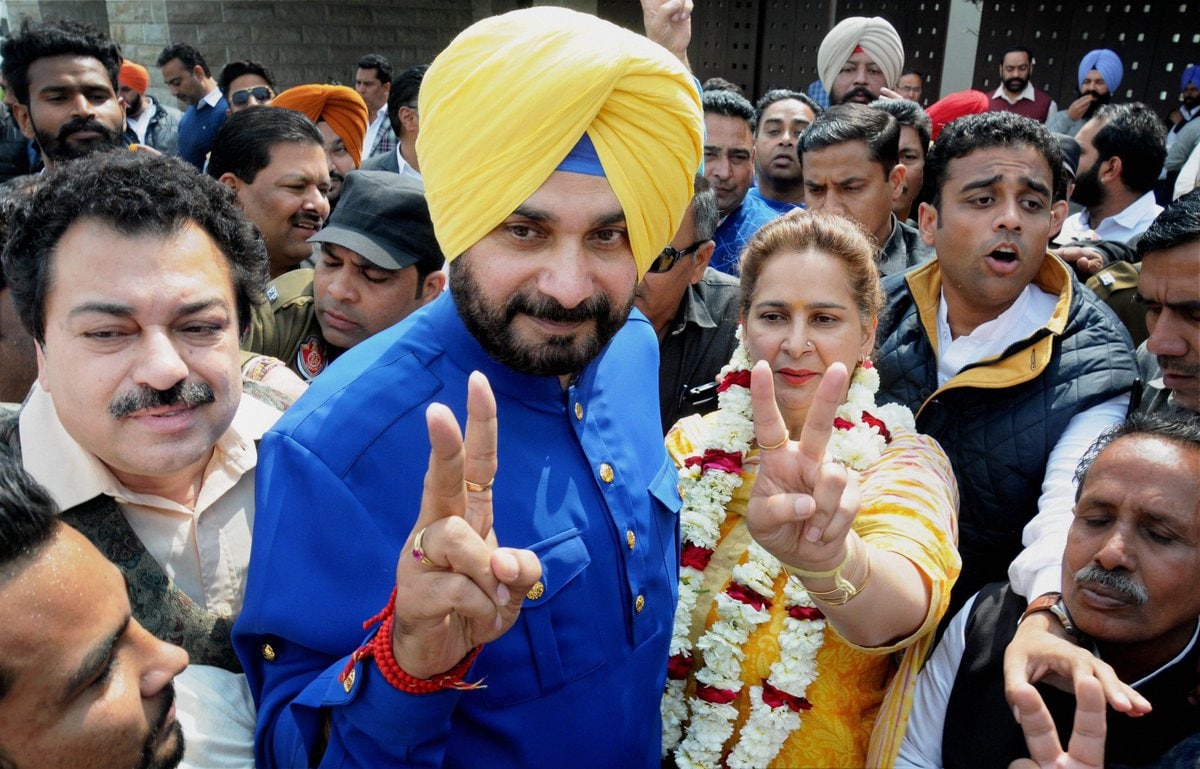 Mar 11, 2017 14:23 (IST)
PM Modi speaks to Congress's Amarinder Singh to congratulate him on victory in Punjab
Mar 11, 2017 14:22 (IST)
Punjab Chief Minister Parkash Singh Badal to resign tomorrow
"I will meet the Punjab Governor tomorrow and submit my resignation," 89-year-old Mr Badal, who has been the Chief Minister of Punjab five times, said. 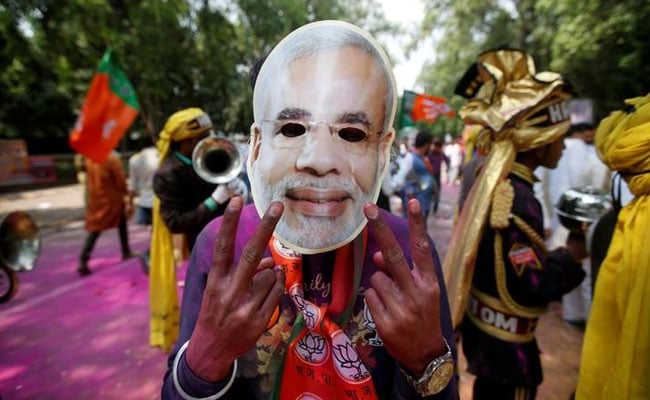 "Where's the party tonight?" BJP workers celebrating the UP election results
Mar 11, 2017 13:42 (IST)
EVMs were tampered with in UP, alleges BSP chief Mayawati
- The Muslim vote has gone to the BJP? Can anyone digest this? Clearly voting machines have been tampered with
- In 2014 too there were such fears. Press any button but the vote went to BJP
- In BMC election too such questions were raised 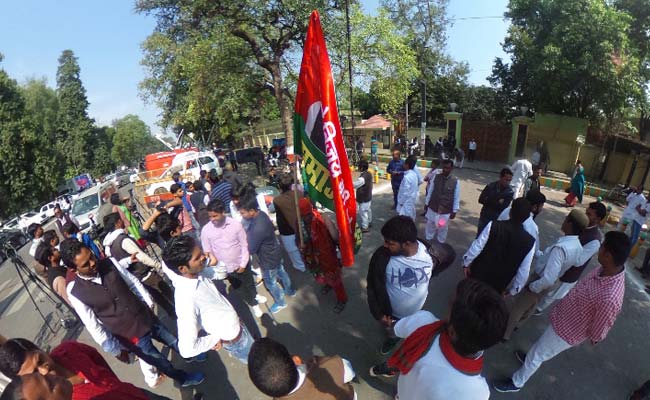 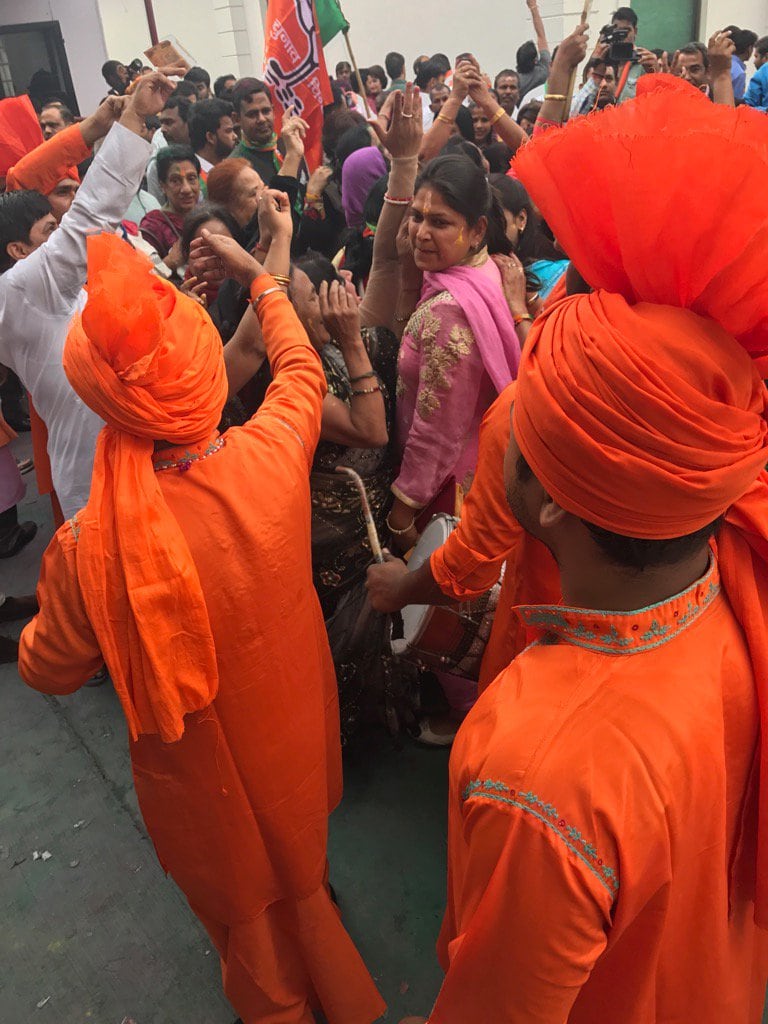 At BJP headquarters in Delhi, drums and the sea of saffron
Mar 11, 2017 12:42 (IST)
BJP has reached new heights in Uttarakhand and UP: Rajnath Singh
The Home Minister says "This is a big victory ...BJP has changed the political picture of the country"

We go by what our central leadership thinks is best, says @capt_amarinder. Explaining much of the mess the Congress is in #ResultsWithNDTV

Punjab voter is very smart, understood AAP has no leadership, no credibility: @capt_amarinder#ResultsWithNDTV

Mar 11, 2017 12:30 (IST)
Captain Amarinder Singh on Congress's big performance in Punjab
Would like to thank Congress workers, from seniors to juniors
Thanks goes to people of Punjab as well
I was saying this from the start, that the Punjabi voter is enlightened enough to make the right choice
Arvind Kejriwal's a summer storm - he came and he's gone 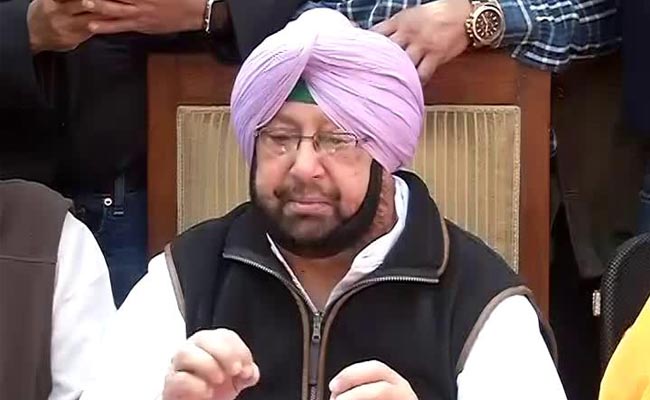 Ambika Soni on @capt_amarinder 's big moment: Punjab win not only on account of him. Congress on point, as ever. #ResultsWithNDTV

Saffron Holi in UP, big celebrations for a big win #ResultsWithNDTVpic.twitter.com/b7NucbVMgL

Mar 11, 2017 12:10 (IST)
Punjab election results: Navjot Singh Sidhu on Congress's performance
We have to leave behind the mentality of revenge and work for Punjab's development
We have to fight to bring back the lost pride, the lost wealth of Punjab
You need good intent to win. Arvind Kejriwal lost because his intent wasn't right. He wanted everything for himself
I want to promise Sonia Gandhi that we will present Punjab as an example
And no sacrifice will be too large for it
(On being asked what role would he want?) What's the hurry brother? I am the principal of the school you went to
If I have been able to campaign across the state, the credit goes to the workers of the party and my wife

Punjab election results: Navjot Sidhu addresses media after Congress's stellar performance
Mar 11, 2017 12:07 (IST)
Election results 2017: Modi ji is perceived as a messiah of the poor, says Ravi Shankar Prasad
Mar 11, 2017 12:06 (IST)
UP result tectonic shift in the polity of India: Ravi Shankar Prasad
"It is an extraordinary result. I think even young Muslims voted for us," says the BJP leader

Mar 11, 2017 12:04 (IST)
Chandan Mitra on UP results
BJP's Chandan Mitra says there was no polarisation campaign in UP at all. It is a bundle of lies
Mar 11, 2017 12:03 (IST)
Congress's Digvijaya Singh on whether Rahul Gandhi should step down after UP result
I have always been of the opinion that Congress has to build up regional leadership
We have to take decisive action as to what we should we be doing to build up the Congress in states where we don't have leaders
The Nehru-Gandhi family is the biggest binding factor for the Congress. That's why the leadership has to come from Rahul Gandhi
Not true that Congress doesn't encourage young leadership. Rajiv Gandhi picked me to head a state when I was 31
PM Modi and Amit Shah have very aggressively pushed the line of elections on totally communal grounds. They talk of development but their foot soldiers work only on Hindus and Muslims 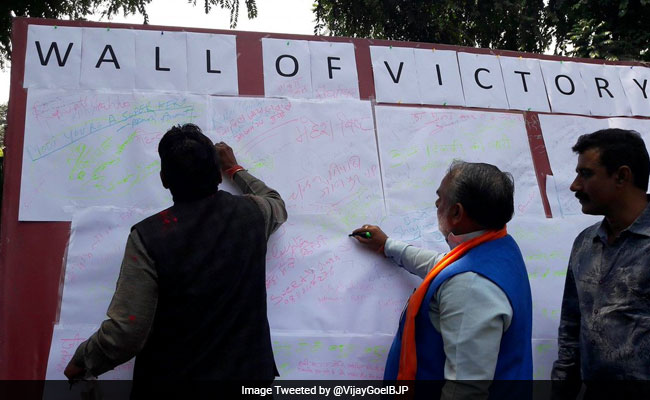 in race for UP CM , Lucknow mayor Dinesh Sharma . very close to both Amit Shah and Modi . says party will decide @ndtv#ResultsWithNDTVpic.twitter.com/im0Y5whmcd

People voted with hope in 2014 for Modi ji, this time they are voting with confidence: @PrakashJavdekar#ResultsWithNDTV

Mar 11, 2017 11:37 (IST)
Opposing demonetization is opposing Modi ji: BJP's Keshav Maurya
He says "The country, and now UP, will not stand any opposition to Modi ji"

Mar 11, 2017 11:35 (IST)
Excessive reliance on demonetisation did not help us: Congress's Ashwani Kumar
"We were seen standing with the rich and the corrupt. That was not our intention," he says

Most sigificant state election I have seen in many, many years, says @PrannoyRoyNDTV on #UttarPradesh#ResultswithNDTV

Modi wave through and through. BJP leaders were right when they said 300+ will happen for UP. #ResultsWithNDTV

Waiting for @digvijaya_28 at the congress office in Goa as people gather at an electronics store underneath it @ndtv#electionswithndtvpic.twitter.com/svfJGj7Trt

Except the top leaders, no one knows who will be UP CM. Amit Shah will pull out a rabbit from hat, says @DrChandanMitra#ResultsWithNDTV 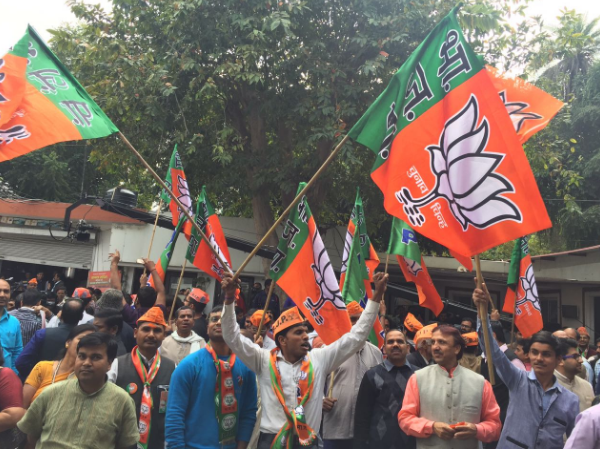 The scenes outside the BJP headquarters in Delhi as the party celebrates its stellar performance in Uttar Pradesh
Mar 11, 2017 10:48 (IST)
BJP's Chandan Mitra on who will be UP Chief Minister
"Except the top leaders, no one knows who will be UP chief minister. Amit Shah will pull out a rabbit from the hat," he says

BJP heading towards 300 seats now in UP. #ResultsWithNDTV

Mar 11, 2017 10:23 (IST)
BJP's UP chief Keshav Prasad Maurya says the big win is a mandate on PM Modi. "He's definitely going to be the next PM in 2019" he adds
Mar 11, 2017 10:22 (IST)
Public has rejected SP-Congress alliance, says BJP MP Yogi Adityanath
"Both Samajwadi Party-Congress and BSP have been wiped out by the people of Uttar Pradesh. People of UP have voted in favour of the work done in these two and a half years under PM Modi," Yogi Adityanath says
Mar 11, 2017 10:20 (IST)
PM Modi has become rallying point for BJP across India: Jitendra Singh
"BJP has emerged as the most inclusive party and inspired the voters to rise above the traditional feudal mindset of parties in the state. With kind of support he enjoys, PM Modi has become a rallying point for the party across the country," says the union minister. 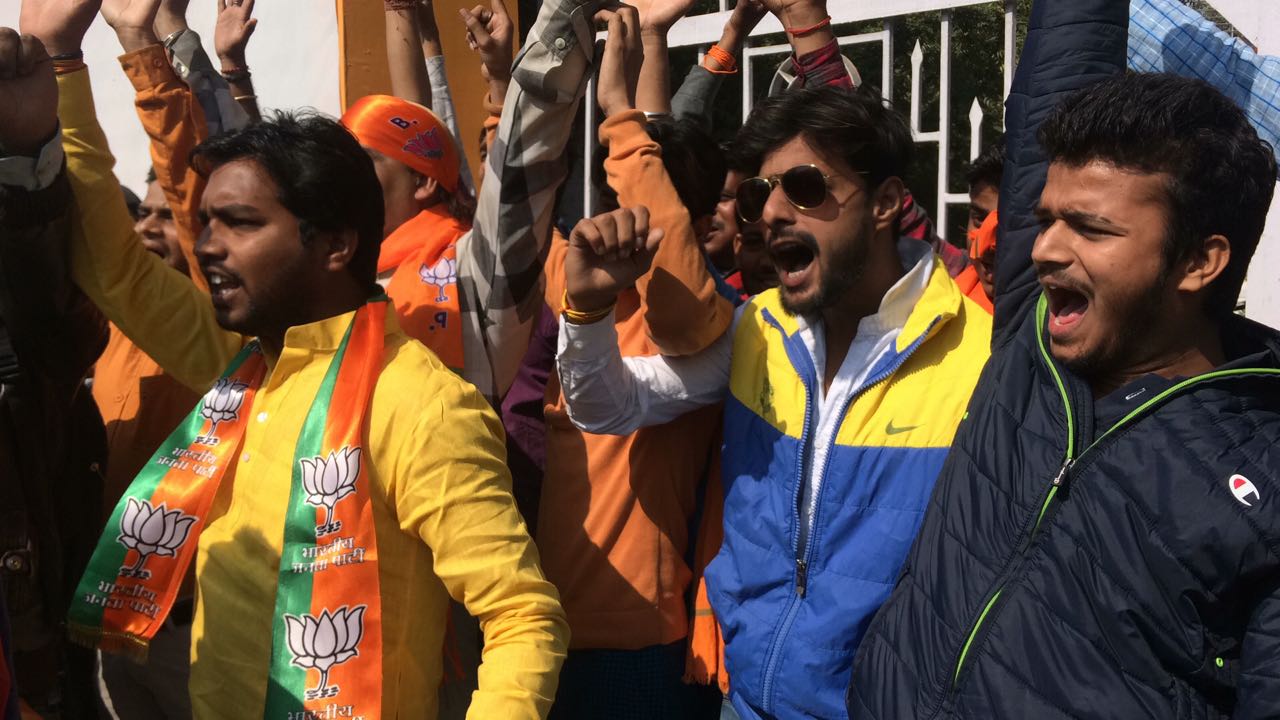 Jubilant party workers outside the BJP office in Lucknow
Mar 11, 2017 10:08 (IST)
Samajwadi Party's Madhukar Jetley on Akhilesh Yadav's leadership in UP polls: "Any president of the party who would have led the party to such a result would be answerable"
Mar 11, 2017 10:07 (IST)
Uttar Pradesh: 2 hours into counting, BJP ahead in 265 of 379 leads
Uttar PradeshPunjabGoaUttarakhandManipurElection Results