Army Men 'Drag' Terrorists' Bodies As They Could Have Explosives: Officer

The comment comes after a purported video of soldiers dragging a dead Jaish-e-Mohammed (JeM) terrorist by chains tethered to his legs in Jammu and Kashmir surfaced. 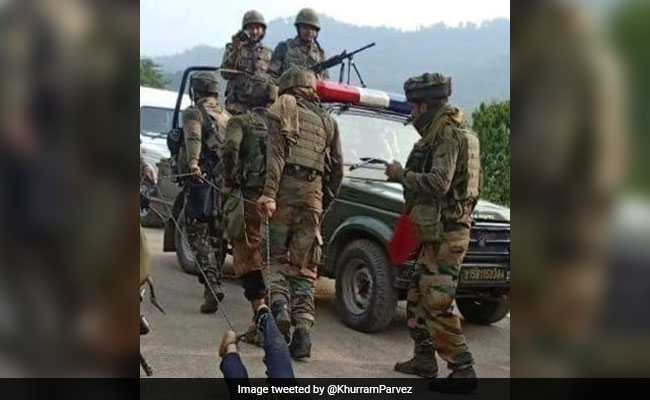 South Western Command chief Lieutenant General Cherish Mathson said on Saturday that army personnel dragged bodies of terrorists instead of picking them up, as terrorists tie explosive devices and grenades around their bodies.

The comment comes after a purported video of soldiers dragging a dead Jaish-e-Mohammed (JeM) terrorist by chains tethered to his legs in Jammu and Kashmir surfaced, triggering accusations of human rights violations.

This followed an encounter in which three terrorists were killed and 12 security personnel injured in the state's Reasi district on Thursday.

"Terrorists tie IEDs (improvised explosive devices) and grenades around their bodies and there is a threat to army men if they pick up the body. It is a drill of the army to drag the body with ropes to save themselves from activated IEDs or other explosives," General Mathson said on the sidelines of a press conference on Haifa Day celebrations.

On the issue of force restructuring, General Mathson said armies all over the world review themselves periodically to see whether its structure was aligned with its strategy.

He a review had been ordered but nothing was finalised yet.

On the occasion of the centenary celebrations of the Haifa Day, Army chief General Bipin Rawat would visit Jaipur and take part in the inauguration of the Haifa Statue, General Mathson said.

Haifa Day is celebrated to mark the liberation of the Haifa city during the World War I by the Allied Forces.

The Indian army commemorates September 23 every year as Haifa Day to pay its respects to Indian soldiers who were part of the 15th Imperial Service Cavalry Brigade in that operation.