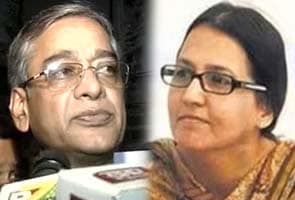 Bhopal: A CBI court has today ruled that a BJP leader from Bhopal will have to go through a lie detector test. Dhruv Narayan Singh, a MLA, has been interrogated thrice in connection with the murder of activist Shehla Masood who was found dead in her car last year.

Ms Masood's assassination was allegedly planned by Zahida Parvez, an interior decorator who was jealous of the activist's close friendship with Mr Singh. Ms Parvez was allegedly involved with the 53-year-old MLA, and stalked him secretly. The CBI believes she monitored his phone bills to track who he was in touch with, and followed him once to Ms Masood' home. These details were revealed by a diary that Ms Parvez fastidiously maintained; it is now important evidence against her.

Promoted
Listen to the latest songs, only on JioSaavn.com
The interior decorator who was arrested last week has consented to a lie detector test. Two men who helped her kill Ms Masood have also been arrested; so has a woman named Saba Farooqi who was close to Ms Parvez and was aware of her plans to murder the activist.