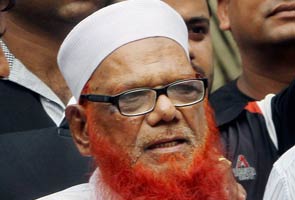 The special cell of Delhi police produced Tunda before Metropolitan Magistrate Akash Jain after expiry of his police custody remand in connection with another case in which he is accused of allegedly helping Pakistani nationals illegally enter India.

It said that they did not need Tunda's further custodial interrogation custody in the case of illegal infiltration but needs to quiz him in the 1997 bomb blast case.

The police told the court that Tunda was earlier declared as a proclaimed offender in the 1997 Sadar Bazar blast case and they need his sustained custodial interrogation to unearth the entire conspiracy leading to the terror attack.

30 people were injured in two blasts near a procession in the Sadar Bazar area on October 1, 1997.

Police said they need to interrogate Tunda to know about other conspirators who were part of the conspiracy which led to the blast.

"Accused (Tunda) is remanded to police custody remand for 10 days for his sustained interrogation and for unearthing the links of conspiracy and links of accused with terrorist organisation and financiers as well," the court said.

70-year-old Tunda was arrested from the Indo-Nepal border at Banbasa on August 16. He was earlier remanded to police custody for questioning in connection with 37 bomb blast cases across the country.

On September 7, Tunda was remanded to four-days police custody for unearthing the source of explosives which were provided to Pakistani nationals arrested in 1998 in connection with 37 bomb blasts.

Promoted
Listen to the latest songs, only on JioSaavn.com
Police had told the court that the blasts had taken place in 1997 in Delhi and adjoining areas and 20 cases had been registered.