Three people including a child were killed in Pakistani shelling and five others were injured in Jammu and Kashmir's Kupwara. 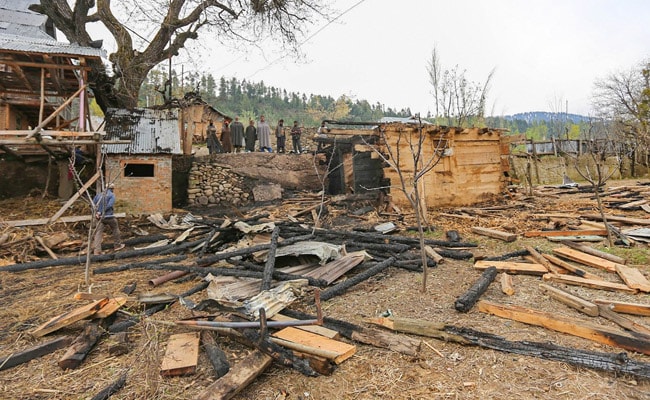 Several homes were destroyed in Pak shelling in Kupwara.

Caught between raining bombs and high-risk COVID-19 zones, the fleeing villagers in Jammu and Kashmir's Kupwara had nowhere to go when heavy artillery shells from Pakistan hit their villages on Sunday.

When the shelling stopped and people started returning to their damaged homes on Monday, they found themselves at a crossroads. Many houses hit by shells have been damaged. People are unsure when shells will land again in the villages.

It was the first time that heavy artillery shells hit villages so deep inside Kupwara district. Three people including a child were killed in Pakistani shelling and five others were injured.

At the height of the coronavirus crisis, the villagers were literally caught between a rock and a hard place.

The villagers who had to flee their homes say people in neighbouring villages did not give them shelter over coronavirus fears while they were stopped from entering others because they were high-risk or "red" zones. Several villages in Kupwara have been declared as red zones after a spike in COVID-19 cases.

"We fled our homes without footwear when the shelling began. The police tried to stop us when we reached neighbouring villages. They told us we are getting into a red zone," said a villager.

"The villagers too did not give us shelter because they were afraid coronavirus infections," he said.

Women used social media to convey their pain, forced to flee their homes amid the COVID-19 crisis and huddle together for safety.

"What happened to our social distancing? We can't sit in our homes and prevent spread of COVID. We had to flee our homes and huddle together for safety," a distraught young woman said.

A group of women and some young men were also seen confronting the army when troops brought in artillery guns in villages near Panzgam. The villagers said relocating artillery could endanger their lives and property.

The villagers have appealed to the Indian and Pakistani governments to stop shelling and allow people to live in their homes during the crisis.

The tension in the area started last week after five special forces soldiers of the army were killed while blocking an infiltration attempt by Pakistani terrorists.

In retaliation, the army said they targeted terrorist launch pads, ammunition dumps and gun positions of the Pakistani army. After the shelling on Sunday, the army has vowed retribution.