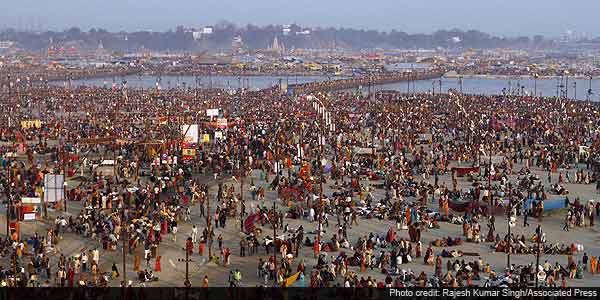 Allahabad: Lakhs of devotees today took a holy dip on the auspicious occasion of Mauni Amavasya in the ongoing Maha Kumbh congregation at the Sangam in Allahabad.

According to a rough estimate by officials, the number of people to have taken a dip by the crack of dawn appears to be "not less than 20 lakh" and the final turnout may exceed the projected estimate of three crore.

Devotees started arriving at the bathing 'ghats' along the banks of the Ganga since last night; the special celestial configuration which makes Mauni Amavasya auspicious has been in place since Saturday afternoon.

The 12-yearly Maha Kumbh congregation is known to reach its climax, in terms of turnout, on Mauni Amavasya and the administration has made adequate security arrangements.

The star attraction of the day remains Shahi Snaan of the 'Akharas' - orders of martial ascetics established by Adi Sankara - which proceeded, in turns, towards the holy river's confluence with Yamuna and mythical Saraswati in majestic processions.

The Maha Kumbh witnesses altogether three Shahi Snaans, the first of which took place on Makar Sankranti (January 14) and the third and last is scheduled on Basant Panchmi (February 15).

There are altogether 13 'Akharas' belonging to various sects and each of them have been allotted specific time, ranging from 30 minutes to an hour, depending upon the size of their procession.

While the elderly went through the rituals observing a vow of silence (the word Mauni is derived from maun which means silence), others watched the sight of swords and spears wielding 'Naga' ascetics moving about with ash smeared on their bodies.

While the 'Naga sadhus' are reaching the venue from their respective camps on foot, their leaders known by honorifics like 'Shri Mahant' and 'Mahamandaleshwar' cover the distance perched atop richly-decorated chariots with musical bands playing devotional tunes.

Promoted
Listen to the latest songs, only on JioSaavn.com
Make-shift roads have been laid down with the help of metallic chequered plates with barricading on both sides to ensure that the Shahi Snaan processions go on without any inconvenience.