Outside his Silver Oak apartment building in Mumbai's Powai area, friends, neighbours and others gathered outside the building were heard shouting slogans of 'Bharat Mata ki Jai' and 'Vande Mataram'. 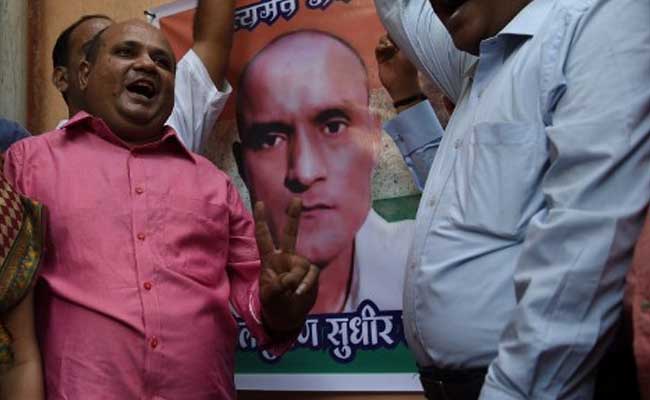 Kulbhushan Jadhav's friends and associates in Mumbai celebrated by shouting slogans, bursting crackers and sharing sweets after the International Court of Justice (ICJ) ordered Pakistan to put his execution on hold for now'.

The world court said Pakistan should make sure that Mr Jadhav, sentenced to death last month by a Pakistani military court on charges of spying, should not be executed until a final ruling on India's appeal.

Outside his Silver Oak apartment building in Mumbai's Powai area, friends, neighbours and others gathered outside the building were heard shouting slogans of 'Bharat Mata ki Jai' and 'Vande Mataram'.

The Jadhav family, which stayed on the fifth floor of the building, has moved out and their apartment is locked.

"The prayers of 125 crore Indians have been answered. We thank the ICJ for delivering such a welcome ruling," Tulshidas Pawar, Mr Jadhav's childhood friend, told the Press Trust of India.

Mr Pawar and other friends of Mr Jadhav held a Ganesh Puja for a "favourable court verdict". Prayers were also organized at a residential society in central Mumbai's Lower Parel area where the former Navy officer grew up.

A signature campaign was also launched by some in that complex in support of Mr Jadhav.

The 47-year-old former navy officer grew up in Mumbai and stayed in the police quarters in Parel with his family.

After studying at King George School, Mr Jadhav went to the Ruia College before joining the National Defence Academy at Khadakvasla in Pune.

India counts the top UN court's ruling as a big win. "I assure the nation that under the leadership of Prime Minister Narendra Modi, we will leave no stone unturned to save Kulbhushan Jadhav," said Foreign Minister Sushma Swaraj.