Kulbhushan Jadhav Was Under Stress; Wife And Mother Had To Change For Meeting: India

Pakistan conducted Kulbhushan Jadhav's meeting with his wife and mother in a manner which violated the "letter and spirit of our understandings", the External Affairs Ministry said

It was clear that Mr Jadhav was "under considerable stress", the foreign ministry said

New Delhi: A day after the family of Kulbhushan Jadhav, the Indian man sentenced to death in Pakistan, met him in Islamabad, India called the exercise "lacking in any credibility" and said the "overall atmosphere of the meeting was intimidating". Mr Jadhav's mother and wife were forced to change their clothes, not allowed to speak in their mother-tongue, and his wife's shoes were never returned, said New Delhi today.

Mr Jadhav, 47, met his wife Chetankul and mother Avanti Jadhav for around 45 minutes across a glass screen yesterday. Arrested last year, Mr Jadhav was sentenced to death in April on charges of spying after what India called a "kangaroo court".

Mr Jadhav's family handled the meeting "with great courage and fortitude", said Mr Kumar, accusing Pakistan of using it to try and "bolster a false and unsubstantiated narrative of Mr Jadhav's alleged activities".

The cultural and religious sensibilities of the family were disregarded, said the official, when "under the pretext of security precautions... they were asked to remove their mangal-sutra, bangles and bindi" and also change their clothes. 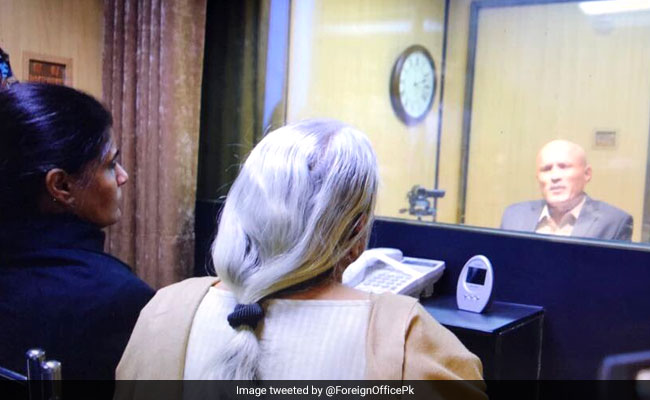 Kulbhushan Jadhav, 47, met his wife Chetankul and mother Avanti Jadhav for around 45 minutes across a glass screen yesterday,

Mr Kumar said Mr Jadhav's mother was prevented from talking in her mother tongue, "repeatedly interrupted while doing so" and eventually stopped.

"For some inexplicable reason, despite her repeated requests, the shoes of the wife of Mr Jadhav were not returned to her after the meeting. We would caution against any mischievous intent in this regard," said Mr Kumar.

India also sought to set the record straight on Mr Jadhav, who was heard expressing gratitude to Pakistan for arranging the meeting in a video played repeatedly by Pakistani officials yesterday.

Mr Jadhav "was under considerable stress and speaking in an atmosphere of coercion. Most of his remarks were clearly tutored and designed to perpetuate the false narrative of his alleged activities in Pakistan. His appearance also raises questions of his health and well-being", said the spokesperson.

The meeting has been viewed in India as choreographed propaganda by Islamabad, which repeated old allegations that India has strongly rubbished.

Promoted
Listen to the latest songs, only on JioSaavn.com
India says the family was taken to the meeting without the Indian Deputy High Commissioner, who could join only after "pressing the matter" with officials.