Kolkata news: Metro rail services resumed in the city on Monday after a gap of more than five months. The regular services were suspended on March 23 due to the COVID-19 lockdown. 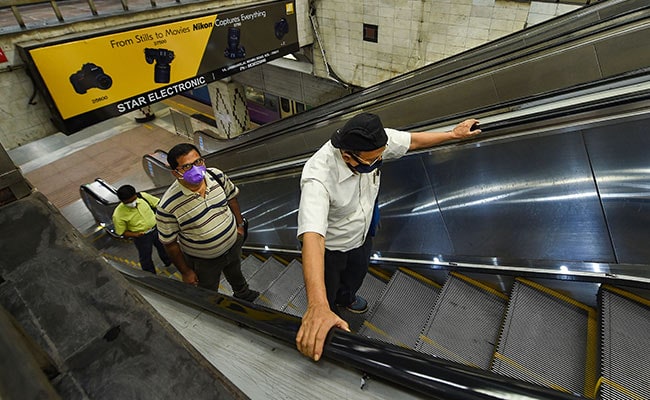 Metro rail services in Kolkata resumed on Monday after a gap of more than five months. The regular services were suspended on March 23 due to the COVID-19 lockdown. Special trains, however, were run for NEET aspirants and their guardians on Sunday, an official said. "Services have resumed at 8 am and around 3,000 people have commuted in the first two hours," Kolkata Metro Railway General Manager Manoj Joshi told news agency PTI.

"The last trains from the originating stations on both sides will commence their journey at 7 pm and complete it by 8 pm," Mr Joshi said, adding that all safety protocols including social distancing are being followed. A train is halting at a station for 30 seconds instead of the previous duration of 20 seconds to avoid rush during boarding, a Metro Railway spokesperson said. A total of 110 trains are being run on the Noapara-Kavi Subhash line at an interval of 10 minutes during peak hours, according to  officials.

Metro trains will not run on Sundays for the sanitisation of rakes and stations, the spokesperson added. Commuters can book their tickets online and download e-passes or use smart cards. The e-passes mention the departure and destination points along with time slots.

There was mixed reaction on the ease of downloading of e-passes. While some found it difficult, others felt that the no contact ticketing system is ideal in the present situation. The Metro Railway has decided to allow a maximum of 400 passengers on a train to avoid over-crowding.

Passengers will have to wear masks and sanitise their hands before boarding the trains, a Metro Railway official said. Commuters will have to undergo thermal screening while entering a station. The Metro Railway authorities have urged elderly people and children to avoid travelling by Metro train.