The grocery in the heart of the city's dense Chunchugatta Gate neighborhood is one of India's 20 million mom and pop stores, called kiranas.

The tiny stores are emerging as key partners for Amazon, Reliance and Walmart's Flipkart.

The grocery in the heart of the city's dense Chunchugatta Gate neighborhood is one of India's 20 million mom and pop stores, called kiranas, which have been fixtures in the country's retail landscape for decades. In much of the world, small merchants have been driven out of business by huge retailers such as Walmart Inc. and Amazon.com Inc.

But kiranas remain an integral part of retailing in India-accounting for 90% of the country's consumer purchases, they helped the nation's 1.3 billion people stock up on essentials during a devastating coronavirus wave in April and May. And the tiny stores are emerging as key partners for Amazon, Mukesh Ambani's Reliance Industries, and Walmart's Flipkart online unit as they seek to dominate the lucrative $1 trillion Indian retail market.

What these hole-in-the-wall shops have that the global mega-merchants lack is an extensive network in India's vast hinterland. The e-tailing giants are eager to expand beyond selling electronics and fashion online into India's mammoth food and grocery segment, where less than 1% of sales have moved online, according to Forrester Research. To make that shift, they're counting on wooing bulk orders from kiranas, as well as striking deals to provide credit services or use the stores as fulfillment centers. 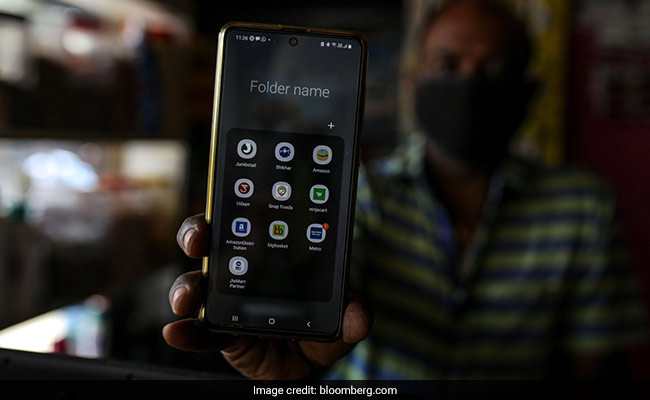 Shopkeepers who once had no more than a calculator and a telephone to handle business now use apps supplied by the e-commerce giants to replenish stock, manage inventory, and cater to customers. The change is evident at Bhoganatham's shop. On his 5-inch-display smartphone, almost a dozen apps from Reliance's JioMart, Amazon, and many startups vie for his business. After dealing for decades with a fragmented supply chain of hundreds of distributors that offered costly credit, tiny Indian grocers like his are spoiled for choice. "I don't have to trudge around the bazaar all day, stock list in hand, while losing business at the shop," Bhoganatham says. He compares prices and orders from whichever app offers the best discounts and credit terms. "No more weeklong waits. The stock is at my doorstep the next day," he says, adding that he can offer a wider range of products. "And I can sit in the shop and continue to serve my customers."

Smartphones are becoming an increasingly popular way to shop online, watch streamed content, and make digital payments in India. Cisco Systems Inc. forecasts the number of internet users there will reach 900 million by 2023 as more first-time smartphone users, many in rural locations, tap into the internet. Forrester Research estimates Indian e-commerce sales will reach $111 billion by 2024, nearly doubling from $60 billion in 2020. 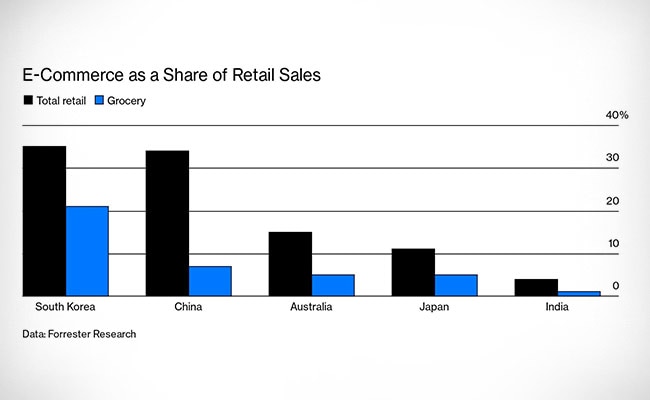 After losing out in China to homegrown behemoths such as Alibaba Group Holding Ltd., Amazon founder Jeff Bezos has made India the centerpiece of his ambitions for global growth. He's pledged to invest $6.5 billion there. Meanwhile, Walmart paid $16 billion in 2018 to acquire popular Indian e-commerce player Flipkart and has since plowed billions more into the country.

They face a tough local competitor in Ambani, Asia's richest man. Pivoting from his core businesses of oil and petrochemicals, he's intent on building a massive e-commerce business from scratch. Expanding on the Jio wireless venture he successfully rolled out in 2016, Ambani is determined to turn Jio's army of wireless customers into buyers on his new e-commerce business. "These are still nascent stages for Reliance, but they sure have a good head start," with more than 400 million wireless subscribers across India, says Anjna Bhati, head of data analytics and artificial intelligence at BluePi Consulting Pvt Ltd.

Startups such as Jumbotail, Khatabook, ShopX, and Udaan, which do everything from delivering wholesale supplies to offering inventory-management technology to extending credit, are part of this retail mosaic. The segment is so hot that entrepreneurs have coined a name for it: kirana tech.

Walmart's Flipkart works with 1.6 million kiranas, offering them wholesale bulk delivery services and turning them into so-called assisted buying zones, which provide first-time Flipkart shoppers with personalized help placing orders, even reading them the specifications or sharing photos of goods for sale. The average value of monthly deliveries by its kirana partners jumped almost 30% in 2020, the company said in May. Amazon has partnered with 28,000 tiny local shops in hundreds of towns to provide local deliveries within a 2.5-mile radius of their locations, and signed up more than 55,000 small stores whose staff assist consumers with placing online orders.

One challenge the giants will have to contend with is India's slow pace of adopting technology. The nation's online sales of $33 billion in the year ended March 2021 was only a tiny fraction of China's $1.5 trillion, estimated by the China Internet Network Information Center. Mostly accustomed to purchasing with cash, Indians are also behind in the digital payments that are critical to the growth of e-commerce. Although the number of online transactions doubled to 34.3 billion in the year through March 2020, according to India's central bank, they were still just one-eighth the number in China.

The courtship between the e-commerce giants and the kiranas hasn't always been smooth. For years shop owners have been wary of Amazon and Walmart, accusing them of threatening the livelihoods of small online and offline sellers. As recently as April, an association of small merchants across India protested against the two big U.S.-based retailers for alleged unfair trade practices.

They've asked courts and antitrust regulators to rein in the e-commerce giants, alleging that they're seeking to break India's retail backbone-the kirana-with practices such as deep discounting. That inherent suspicion may prevent many kiranas from working exclusively with one large retailer. Currently the minuscule merchants do purchasing or accept delivery jobs through multiple competing apps, allowing them to play the e-commerce giants against one another to extract better prices and credit terms.

While the big companies would prefer exclusive deals with individual kiranas, they can't afford to be adversarial with them, says Technopak's Bisen. With their close relationships with shoppers, the kiranas also foster real estate deals, job searches, and even matrimonial matches in a country where arranged marriages are common. They sell on credit and deliver to customers' doorsteps. That's made them so well-entrenched in communities that e-commerce giants need to collaborate, Bisen says.

"India is at the vanguard of food and grocery convenience retail via the kiranas," says Ashish Jhina, chief operating officer of Bengaluru-based Jumbotail Technologies Pvt Ltd., who co-founded the online wholesale marketplace startup in 2015 with a Stanford business school classmate. "Hybrid convenience stores that cater to walk-ins as well as deliver online orders-this could be the future of the small kirana."