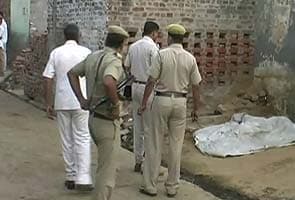 The village in Rohtak, Haryana, where a young couple was killed on Wednesday

Rohtak: On Wednesday evening, a village in Haryana looked on as a girl was lynched by her family, and a boy beheaded. Hours ago, they had returned to the village, thinking that their families would finally allow them to marry.

Her parents and uncle have been arrested and her brother is missing since the crime, a shocking example of medieval-style killings in the name of 'family honour' in Chief Minister Bhupinder Singh Hooda's hometown, Rohtak, and in a village just 80 km from the capital.

Without showing a shred of remorse, the girl's father said, "I have no regrets. I'll do it again, if I have to."

Nidhi Barak, 20, and Dharmender Barak, 22, eloped and went to neighbouring Delhi on Tuesday. Their families in the Gharnavati village did not approve of the relationship, as both were from the same village. Nidhi was a student of fine arts, while Dharmender was pursuing a technical course.

Nidhi's parents allegedly persuaded her to come back, promising not to harm the young lovers.

The police say what followed was a savage assault on the couple at Nidhi's home, ending with their death. The girl was beaten to death in full public view. The boy was brutally beaten and his arms and legs broken, before he was beheaded. His headless body was allegedly dumped at a public square in the village.

Both families have justified the murders.

"What happened was wrong, but if a father took such a big step there must be a reason," the girl's aunt has said. Dharmender's family has refused to file a case, saying whatever happened was 'right'.

The family of the girl was allegedly caught in the act of cremating her, when a police team arrived. They had been alerted by a villager. The police then took the girl's half-burnt body and the boy's remains for a post-mortem.

Promoted
Listen to the latest songs, only on JioSaavn.com
Police say relatives of both the girl and the boy are on the run. Murders like these are chillingly common in villages of Haryana bound by the diktats of lawless 'Khap panchayats' who forbid marriages within the same village or same caste. Even political parties are wary of taking on these groups.

The Haryana Human Rights Commission has taken note of the horrific killings and asked for a report from the police.