The Supreme Court on Friday had directed demolition of the apartment complexes within 138 days, a time-line given by the Kerala government. 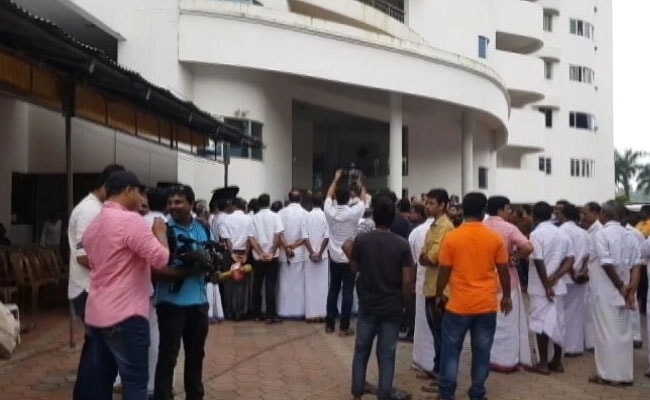 The striking residents said they should be given more time to vacate their homes.

The Kerala government on Sunday began the process for evicting residents of four illegal apartment complexes in Kochi, ordered to be demolished by the Supreme Court, with officials visiting the owners to help them relocate even as a section staged a protest pressing demands, including seeking more time.

The evacuation process will be completed before October 3, said Fort Kochi Sub-Collector Snehil Kumar Singh, given the additional charge as secretary of the Maradu municipality -- where the 343 waterfront flats built in violation of Coastal Regulation Zone norms -- are located.

He said the process will be completed in a peaceful manner and the civic body officials would explain to the residents that the Supreme Court order has to be implemented and offer help in their rehabilitation.

Meanwhile, a section of the residents, who were on a "hunger strike" in front of one of the apartment complexes, ended their protest after the Ernakulam district administration agreed to some of their demands, including restoration of electricity disconnected by the authorities last week as part of the eviction process.

After their meeting with District Collector S Suhas, the representatives of the residents said the authorities had assured them of all possible help within their limitations in the process of vacating their flats and finding new homes.

The residents had also raised demands, including more time to vacate and that the government bear the rent for the alternative accommodation.

The Supreme Court on Friday had directed demolition of the apartment complexes within 138 days, a time-line given by the Kerala government, and asked the state to pay Rs 25 lakh interim compensation to each flat owner within four weeks.

He said the officials visiting the apartment complexes will find out the requirements of the residents.

"We are not trying to evacuate them forcefully. They are our fellow citizens. We have to treat them with respect," the official said, responding to queries on the eviction process.

He made it clear that October 3 was the final date for vacating the flats, whose water and electricity connections have been disconnected last week as part of the pre-demolition process.

While a section of residents started preparations for vacating the flats, another section are on a hunger strike.

The striking residents said they should be given more time to vacate their homes.

They also demanded that the rent for the flats where they will be rehabilitated should be paid by the government. State Chief Secretary Tom Jose has said on Friday the government would take steps to demolish the apartment complexes as per the action plan submitted in the top court.

The administration has said 90 days would be required for demolition of all the buildings and 30 days for removal of debris and clearing of the site. The entire process will be completed in 138 days, it has said.

The government is planning to hand over the buildings to the successful bidder for the demolition on October 11.

On May 8, the apex court had directed that these buildings be removed within a month as they were constructed in a notified CRZ, which was part of the tidally-influenced water body in Kerala.

The court had passed the order after taking note of a report of a three-member committee, which said when the buildings were built, the area was already notified as a CRZ and construction was prohibited.

Earlier, the court had rejected a plea filed by the residents of the area against the demolition order and taken a strong exception to an order passed by a vacation bench during the summer break of the apex court, which had stayed the demolition of these buildings for six weeks.