Kerala Flood Relief Camp: In a photo he posted on Facebook and Twitter, Alphons Kannanthanam is seen lying down on a mattress on the ground. 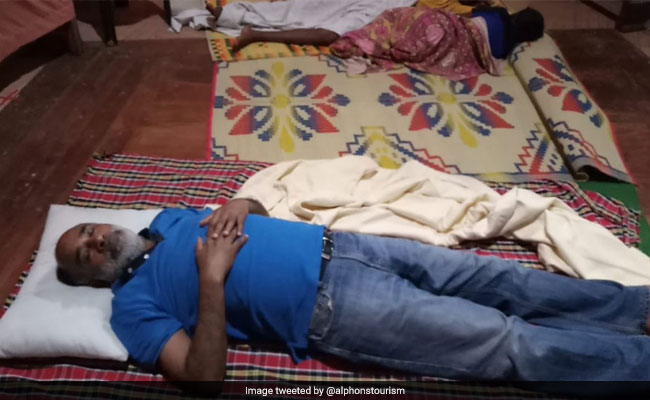 Kerala Floods: Alphons Kannanthanam spent a night at a relief camp in Changanassery.

Union minister Alphons Kannanthanam spent Tuesday night at a Kerala relief camp in flood-battered state - where lakhs have been forced to leave their inundated homes - and tweeted about it. He ended up being trolled for the well-intentioned gesture.

In a photo he posted on Facebook and Twitter, Alphons Kannanthanam, in a t-shirt and jeans, is seen lying down on a mattress on the ground.

Some posts uncharitably called Mr Alphons "show off" while one dubbed him "comic relief".

Dear @alphonstourism ! Being an educated civil servant turned politician with immense experience, we expect mature and responsible behaviour from you! Your sleeping photo op in the flood relief camp was equal to mocking the relief efforts of many! #KannanthanamSleepChallenge

A few days ago, a photo of the minister holding a baby during rescue operations was widely circulated.

Mr Alphons, who is from Kerala, has been touring the state extensively to assess damage caused by the worst floods in a century. 237 people have been killed since August 8 and over 14 lakh displaced after days of torrential rain earlier this month.