Kerala Floods: A flood-like situation has arisen in the Ranni town of Pathanamthitta district in Kerala due to heavy rain. 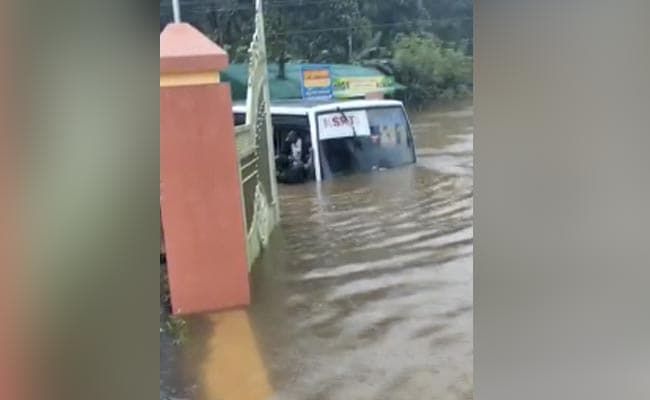 Kerala Floods: Five districts in Kerala are on red alert, seven are on orange.

Kerala Health Minister Veena George on Saturday held a review meeting at Pathanamthitta collectorate to assess water logging in the low lying areas in the district that is witnessing a flood-like situation similar to nearby Kottayam district.

A flood-like situation has arisen in the Ranni town of Pathanamthitta district in Kerala due to heavy rain followed by low-pressure formations in the southeast of the Arabian Sea off the coast of Kerala.

The minister said the water level in the Achankovil river in the Konni Kalleli area of the Pathanamthitta district has been reported to be high in the last three hours.

"Heavy rainfall was reported in the catchment area of the Kaki Dam. The water levels of dams in the district are being assessed on a regular basis under the direction of the District Collector," she said while interacting with media.

Due to the heavy rain in the district, the water levels continue to rise in the catchment areas of dams. The shutters of the Maniyar dam have been opened due to an increase in the water levels in the reservoir.

A red alert has been issued in five districts of Kerala Pathanamthitta, Kottayam, Ernakulam, Idukki, and Thrissur districts.

As per the press release by IMD, red alert is issued in Pathanamthitta, Kottayam, Ernakulam, Idukki, Thrissur districts. Whereas, Orange alert has been issued in Thiruvananthapuram, Kollam, Alapuzha, Palakkad, Malappuram, Kozhikode and Wayanad districts of the southern state.

Meanwhile, four people have died in landslides at Koottikkal in Kottayam and Kokkayar in Idukki districts as heavy rain is continuing in Kerala unabated.

Two deaths have been reported after a car they travelled was washed away by gushing waters in Thodupuzha in the Idukki district.

Chief Minister's Office has informed that help from the Air Force has been sought for rescue in Koottikkal at Kottayam district.

However, the bad weather condition at Kottayam is delaying the rescue operation by the defence personnel.