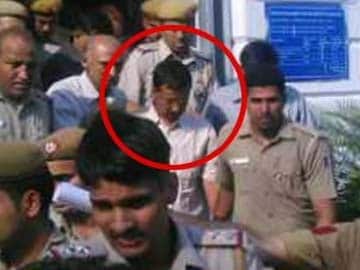 New Delhi: Arvind Kejriwal, the chief of the Aam Aadmi Party, was today arrested and taken to Delhi's Tihar jail after he refused to post bail in a defamation case filed by BJP leader Nitin Gadkari. He is likely to remain in jail at least till Friday, when the court hears the case next. (Kejriwal Apologises to Delhi For Quitting, 'Sorry Sabhas' Soon)

Several AAP supporters, who held protests outside the prison, were detained later.

Yogendra Yadav, Sanjay Singh and Manish Sisodia were among the AAP leaders forcibly removed by Delhi police from the site.

Section 144 on unlawful assembly, which prohibits the gathering of five or more persons, has been imposed in the area.

The AAP chief was summoned based on a complaint by Mr Gadkari, who accused him of calling him "chor (thief)". Mr Kejriwal's party had also named the BJP leader in a list of "India's most corrupt" in January.

In a Delhi court today, Mr Kejriwal declared that he would not give a bail bond on principle, which had the judge asking whether he was looking for exceptional treatment. (Also Read:Single Seat for AAP, But Not A Complete Loss)

"When you are representing AAP, we expect you to behave like an Aam Aadmi. Let the procedure be same for everyone. Is there a problem in furnishing a bail bond?" the magistrate question, adding, "What you are asking for is differential treatment." (Delhi court summons Kejriwal in criminal defamation case)

Mr Kejriwal replied that it was a political case and he had not committed any crime.

"I am ready to go to jail. We are setting precedence. I am not saying that give this treatment only to me. Give it to all," said the anti-corruption campaigner.

This morning, the AAP chief said he was ready for fresh polls in the capital and apologized to the people of Delhi for quitting as chief minister after just 49 days, over the Jan Lokpal Bill. "People didn't understand that we had taken a moral stand. They are angry with us and think we left mid-way," Mr Kejriwal said.