Hardeep Puri made it clear that Pakistan will have to show intentions if it wanted relations with India to move forward. 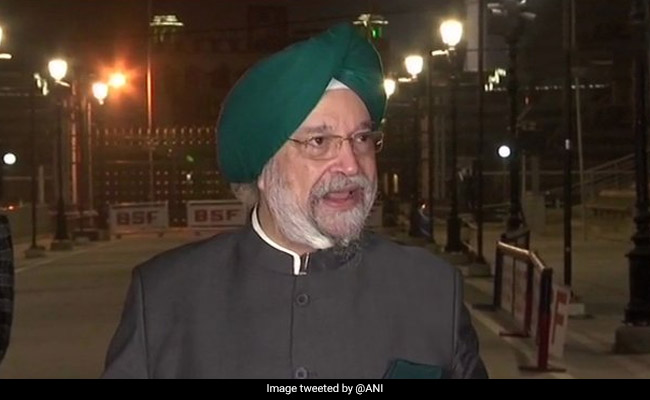 Hardeep Puri made it clear that he was not going for any bilateral discussions with Pakistan.

Union Minister of State Hardeep Puri on Wednesday said though the Kartarpur Corridor was a welcome initiative between India and Pakistan, the relations between the countries could not change just because of this and India will have to deal with the "ground reality of terror".

"We have to deal with ground reality of terror. Terror and talks don't make a happy companion. Relations between both countries cannot change because of the corridor," Mr Puri told media immediately after returning to India on Wednesday evening after attending the ground breaking ceremony of the Kartarpur Corridor in Pakistan along with Union cabinet minister Harsimrat Badal.

Mr Puri made it clear that Pakistan will have to show intentions if it wanted relations with India to move forward.

"Pakistan will have to do a lot of work on (controlling) terrorism and infiltration. If there is delivery on terrorism, and that is an essential pre-requisite, (we can move ahead)," he said.

Union Food Processing Minister Harsimrat Badal said she and Mr Puri had gone to Pakistan to represent the country and also offer prayers to Guru Nanak Dev who spread the message of love and peace.

"I have told the media there that Kashmir is part of India and will remain as such. There is no scope for negotiation on this," Ms Harsimrat, who acknowledged that they were given a lot of warmth and respect in Pakistan, told media after her return.

Both ministers represented India at the function where Pakistan Prime Minister Imran Khan on Wednesday performed the ground-breaking ceremony for the Kartarpur Corridor project near the Kartarpur Sahib gurdwara, where Sikhism's founder, Guru Nanak Dev, spent the last 18 years of his life.

Earlier, while heading for Pakistan, Mr Puri said there was an "opportunity and goodwill" in the decision of the Indian and Pakistani governments to build the Kartarpur Corridor, but sounded a note of caution: "We have to be acutely conscious of the ground realities" in the two nations.

"This is a historic day. This is a long standing demand of the Sikh community. At least, what I know, since 1994-95, we have been making this demand," said Puri, who walked across to Pakistan through the Attari-Wagah check post, around 30 km from Amritsar.

"We have felt for very long that we have been at the receiving end of actions of a country which should not have allowed certain forces on its territory. I don't want to touch on those now," Mr Puri said.

The Minister made it clear that he was not going for any bilateral discussions with Pakistan. "I am not carrying any bilateral brief. But equally, if the ground-breaking ceremony and these atmospherics are done in a positive way and we are able to invoke the Guru Maharaj's blessings, I am sure that it will become a stepping stone to positive things happening in the future," he said.

"This is a corridor that should have been operationalised many years ago. The cartographer who made the (boundary) line made a fundamental mistake. I think this (gurdwara) should have been on this (India) side (of the border). But let's accept the ground realities. We should take one step at a time without getting euphoric," he said.

Mr Puri said that both countries now need to operationalise the corridor project smoothly. "And making the corridor operational and taking this process further will require actions by all stakeholders.

"Let's take these things one step at a time. I don't want to jump the gun, I think we must allow the goodwill of the Guru Maharaj that is the essence of his teaching," he said.

"He was a person at least half a century ahead of his times. And the kind of teachings he has given, if those teachings can be invoked to resolve our problems, it would be a very proud day for me as a Sikh," he added.

Asked to comment on the statements of Punjab Cabinet Minister Navjot Singh Sidhu, who is projecting himself as the person who was instrumental in getting the Kartarpur Corridor project cleared by both countries, Mr Puri said: "I don't want to comment on my colleague (Sidhu) in any way. There is no scope for personalisation here. This is a demand of the Sikh community."

It was at the Kartarpur gurdwara, located around 3 km from the international border and is right opposite the border belt in Dera Baba Nanak in India's Gurdaspur district in Punjab, that Guru Nanak Dev spent his last days till he died in 1539.

The gurdwara, which fell inside Pakistan's territory following the Partition of India in August 1947, has huge significance in Sikh religion and history.

For the past over 71 years, ever since the Partition, Sikhs have been offering prayers near the border watching the gurdwara from a distance.