Roshan Baig, who has been feeling sidelined in the Congress for a while, was suspended for "anti-party activities" on Tuesday evening. 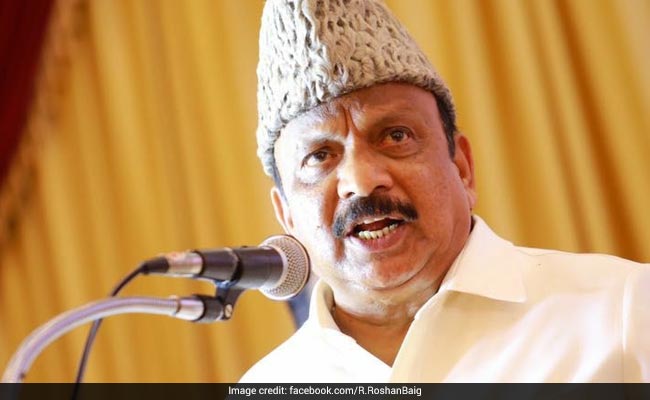 Roshan Baig said that "speaking the truth" about the Congress was his only crime.

A day after being suspended from the Congress for indulging in "anti-party activities", senior Karnataka legislator Roshan Baig hit back at the state leadership today by claiming that he had been targeted for speaking the truth. "It is obvious that I have been specifically targeted by the state leadership. Speaking the truth isn't a crime, is it? I am a disciplined soldier of the Congress party. This is the Indian National Congress. This is not Siddu Congress," he told mediapersons.

The Congress responded by suspending him with immediate effect on Tuesday evening. "The AICC has approved the proposal sent by the KPCC to take action against... Roshan Baig... for anti-party activities," a release issued by the party read. The linking of the Karnataka legislator with the multi-crore IMA Jewels ponzi scam, in which thousands of investors are feared to have lost their money, did not help his case either.

Even today, Roshan Baig criticised state Congress leaders in his remarks to the media. "Why have our state leaders not taken moral responsibility (for the Lok Sabha polls)? Have they called any of us to discuss what went wrong? Now you have taken disciplinary action against me. Why have some Congress leaders who openly defeated our Dalit leader, KH Muniyappa, not been suspended? Some of our leaders openly supported Sumalatha Ambareesh (independent candidate from Mandya). Why was no action taken?" he asked.

The suspended leader said he would consult his seniors in the Congress, including Mallikarjun Kharge, HK Patil and Ramalinga Reddy, before deciding his future course of action.

KPCC chief Dinesh Gundu Rao said Roshan Baig was suspended on the basis of a preliminary inquiry. "Now the AICC will further inquire into this. Further action will be based on how Mr Roshan Baig replies and conducts himself," he added.

Mr Rao said Roshan Baig should have spoken to his seniors in the party instead of going to the media. "It would have been sensible if he had spoken to leaders in Delhi instead of making all sorts of wild statements before the media and defaming the party. He spoke in a very, very bad way, affecting the image of the party. He spoke in a cheap manner about our senior-most leaders. He should not have spoken like that. He is not a first-timer but an MLA for six terms," he added.

The Congress central leadership also decided to dissolve the KPCC today, keeping just the president and working president in place. "We had been discussing this. I told the AICC general secretary as well as the honourable Congress president that we had a huge committee before the election that needs to be reorganised. Now we have to see how we can reorganise not just the KPCC but also the district and block committees. A total reorganisation of the party at all levels," said Mr Rao.