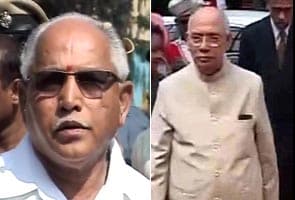 You are aware, allegations relating to land scams, corruption and manipulation of rules and regulations regarding acquisition and denotifying of public lands regularly appeared in the media since September, 2010.  Allegations of serious nature of corruption were levelled against the high office of the Chief Minister of the State by various groups, which delivered representations to me personally, thus creating a cloud on your personal integrity.  You will recall that I addressed the letter of 15.12.2010 seeking factual information from you on the allegations levelled against you.  In your reply dated 19.12.2010, you furnished no details and simply stated that the allegations were politically motivated and without any basis.  However, you informed me that cases relating to land scams have been referred to a Commission of Inquiry headed by Justice Padmaraj, a retired Judge of the High Court.

On 28.12.2010, two Advocates namely Shri Sirajin Basha and Shri K.N.Balaraj came to Raj Bhavan with the petition that the land scams involving the Chief Minister are not being allowed to be investigated by the investigating agencies and even the Lokayukta Police refused to accept their complaint.  Therefore, they intended to file a complaint before the designated Special Court and that they need a sanction to prosecute the Chief Minister and Home Minister.  They also delivered large volumes of documents in support of their allegations.

When you visited Raj Bhavan for a courtesy call on 31.12.2010, I informed you of the receipt of this petition from the Advocates and during the discussion I informed you that this will have to be disposed of expeditiously and this cannot be kept pending indefinitely.

With your letter dated 19.01.2011, you sent to me a Cabinet decision dated 19.01.2011.  The sum and substance of the Cabinet decision is it simply requires me to put a lid on the serious allegations of corruption against you.  In this connection, I draw your attention to the dictum of the Supreme Court of India in M.P.Special Police Establishment vs. State of M.P. (2004) 8 SCC 788 wherein the Court held:
>>>
"If on these facts and circumstances, the Governor cannot act in his own discretion there would be a complete breakdown of Rule of Law in as much as it would then be open for Governments to refuse sanction in spite of overwhelming material showing that a prima-facie case is made out.  If, in cases where prima-facie case is clearly made out, sanction to prosecute high functionaries is refused or withheld, democracy itself will be at stake.  It would then lead to a situation where people in power may break the Law with impunity safe in the knowledge they will not be prosecuted as the requisite sanction will not be granted".

In the light of the above judgment, the Governor is entitled to and required to take an independent decision on the basis of the material available and therefore the Cabinet decision recommending to drop the consideration of the petition itself is unwarranted.
Comments
Governor letterH R BhardwajKarnataka Chief MinisterKarnataka GovernorYeddyurappa