No Threat To JDS-Congress Government In Karnataka: HD Kumaraswamy

Some sections of media are projecting instability, saying disgruntled legislators will not attend the session, HD Kumaraswamy said. 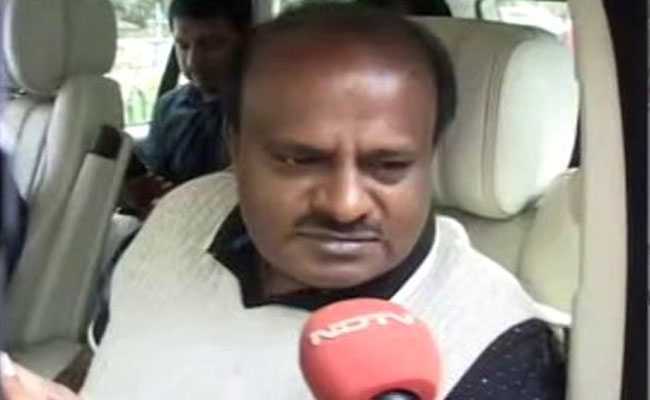 My government is stable. It will complete the remaining four years: HD Kumaraswamy

Karnataka Chief Minister HD Kumaraswamy today ruled out any threat to his eight-month old government, dismissing speculations that disgruntled Congress legislators could pose trouble in the coming budget session of the assembly by staying away from it. The chief minister said he was in regular touch with the Congress leaders.

The JDS-Congress ministry would not only survive before but also post the Lok Sabha elections and complete its full five-year term, he told reporters.

"The government will survive before and after the Lok Sabha polls. My government is stable. It will complete the remaining four years," he said dismissing the persistent talk casting doubts about its longevity. Noting that any coalition would be beset with problems, he said, "how to control all these.... I have to work it out."

His remarks come amid reports that disgruntled Congress lawmakers on the BJP's radar for poaching as part of its bid to topple the ruling coalition might keep away from the session beginning February 6.

Senior Congress leader Siddaramaiah accused BJP of offering Rs 50 crore to his party lawmakers and asserted that the BJP was living under the illusion of coming to power.

None of the Congress lawmakers would fall for it even if offered Rs 100 crore, he told media in Koppal.

"Some sections of media are projecting instability, saying disgruntled legislators will not attend the session... They (Cong MLAs) are in regular touch with me. I don't know whether they are in touch with the Congress. I spoke to them today also. They will come to the session... no problem," Mr Kumaraswamy said.

The JDS leader also said that he would do "whatever needs to be done" to ensure that the government completed its full term. "Let there be deadlines or allurements (to poach MLAs from the ruling coalition). I know how to remove the fuse," he said, as he sought to puncture the claims of BJP that his government might not survive even to present the state budget.

He also claimed that there were "many people" within the BJP itself to "safeguard" him in the event of any threat to his government.

Mr Kumaraswamy's worries have been mounting with the shadow boxing within the Congress raising questions about his leadership and BJP ratcheting up pressure with its alleged toppling bid that had recently triggered a political turmoil.

He had recently threatened to quit if the Congress leaders continued to take potshots at him.

Asked about the "unhappy coalition marriage", Mr Kumaraswamy today said the Congress leaders were happy with him. "... all the Congress MLAs are most happy with me... the way I am keeping them.. unrealistic news is being spread (about instability).