The Karnataka assembly's monsoon session has been cut short by two days, and will now end this Saturday amid the coronavirus pandemic. The state has more than 5.26 lakh Covid cases. 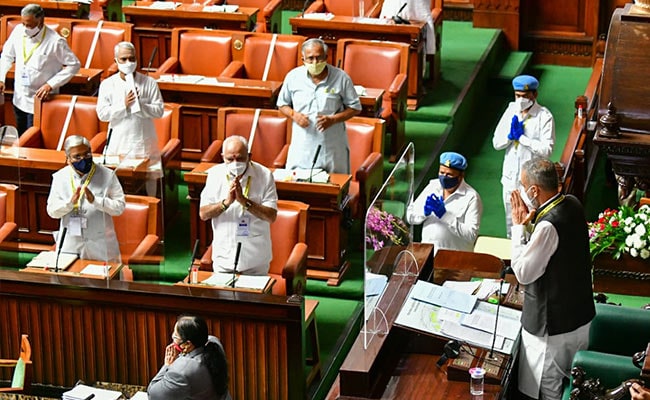 The Karnataka legislature's monsoon session began on Monday in the backdrop of COVID-19 pandemic.

Instead of the originally scheduled 30 bills, only six are likely to come up for discussion in the session, which the BJP had wanted to cut to just three days.

The move was resisted by the Congress, whose members said there was "too much to be discussed".

State Congress president DK Shivakumar said his party did not agree to the government's plan to curtail the session, and stood adamant demanding that the question hour should be held, "as our MLAs have put 1,600 questions".

The farm sector bills, which have dominated the monsoon session of the parliament, are also likely to cast a shadow on Bengaluru, which too has seen protests by farmers and criticism by leaders of the Opposition.

Agriculture Minister BC Patil said that though he has not met any farmers' representatives as yet, the matter would be discussed.

Stating his strong support for the farm sector bills, Mr Patil said, "There won't be any middlemen anymore. The farmers need not worry about loading, transportation and unloading costs. They can sell anywhere they like. We (the BJP-ruled Centre) have removed all restrictions on sale of agricultural produce. But, farmer can also go to Agricultural Produce Market Committee if they want."

Criticizing the minister's remark, Karnataka Congress unit President DK Shivakumar told NDTV, "The bill would have not passed if it been put to vote. We condemn the Deputy Speaker's decision to suspend (eight opposition MPs), it is unconstitutional. They are curtailing democracy. Entire country's farmers are opposing this bill. We are protesting in the House."

Tuesday's session commenced with strict restrictions in place and only those who have Covid-negative certificates were allowed into the Assembly and Council area. This applies to the MLAs, MLCs, bureaucrats, administrative staff and mediapersons.

Several Ministers and legislators have tested positive for the infection. Chief Minister BS Yeddyurappa, health minister B Sriramulu and leader of the Opposition and former Chief Minister Siddaramaiah are among the many politicians who contracted the virus and have since recovered.