Jignesh Mevani could be made Working President of the party's Gujarat unit, sources said, adding that Kanhaiya Kumar and Rahul Gandhi had met over his role in the party

Former student leader Kanhaiya Kumar and independent Gujarat MLA Jignesh Mevani will join the Congress - likely during an event on October 2 - party sources told NDTV this evening. They were scheduled to join on September 28 - on the birth anniversary of Bhagat Singh.

Mr Mevani - a Dalit leader who represents Gujarat's Vadgam constituency - could be made a Working President of the party's state unit, sources added.

Whatever his final role, Mr Mevani's joining is further evidence of the Congress' calculated approach ahead of polls next year, including Punjab, where Dalits are nearly a third of the population.

Mr Kumar - earlier President of the Jawaharlal Nehru University's students' union and now with the CPI - is expected to bring a few other Left leaders with him when he jumps to the Congress.

News of Mr Mevani and Mr Kumar's expected joining underscores the Congress's push to recruit young and dynamic faces ahead of state elections in 2022 and the 2024 Lok Sabha election. 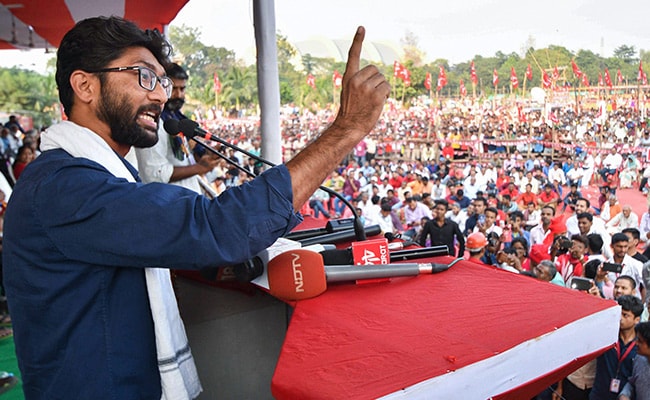 Congress sources have said Mr Kumar has already met Rahul Gandhi - twice in two weeks - and Priyanka Gandhi Vadra - to discuss his future role in the party. Mr Kumar contested the 2019 Lok Sabha election from his hometown of Begusarai in Bihar but lost to the BJP's Giriraj Singh.

Congress sources also said a Jammu-based lawyer who fought for justice in a horrific rape case involving a minor - is also in talks and, if things go smoothly, might join with Mr Mevani and Mr Kumar.

Earlier today Jignesh Mevani tweeted on the Congress' new Punjab Chief Minister - Charanjit Channi, who is the state's first ever Dalit Sikh leader. Mr Mevani applauded Rahul Gandhi and the party for the decision, saying it would have a "tremendous impact... on all subaltern masses".

The decision of appointing Charanjit singh ji as the CM of Punjab is a message that @RahulGandhi and @INCIndia have given.

It will have tremendous impact amongst not just dalits but all the subaltern masses.

For dalits, the move is not just brilliant but soothing too.

Charanjit Channi was sworn in this morning after a "humiliated" Amarinder Singh resigned Saturday, and the Congress' first choice for his replacement - Rajya Sabha MP Ambika Soni - backed out.

Sceptics have said Mr Channi's elevation is simple vote bank math since Dalits are an estimated 31 per cent of Punjab's population and will hold significant sway in next year's election.

Earlier this month Jignesh Mevani also ripped into the BJP after Vijay Rupani was asked to step down as Gujarat Chief Minister. Mr Mevani tweeted: "People of Gujarat would have appreciated had Mr Rupani resigned for his monumental mismanagement of Covid crisis."