"Made Him Wear Shoes": Kamal Nath's Show Of Gratitude For Congress Worker

With the Congress finally back in power in Madhya Pradesh, Chief Minister Kamal Nath, accompanied by Digvijaya Singh, made Durga Lal Kirar wear his shoes, as a mark of gratitude. 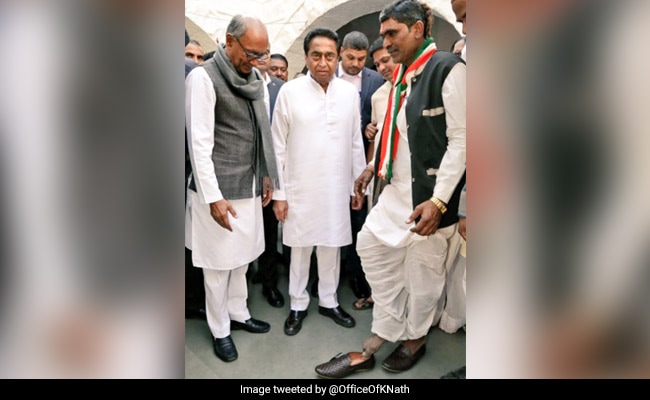 For 15 years, Durga Lal Kirar (right) did not wear shoes, until Wednesday.

In 2003, the Congress received a drubbing in Madhya Pradesh from the BJP, securing only 38 out of 230 seats. As the then Congress chief minister Digvijaya Singh vowed not to contest elections or interfere in state politics for a decade, Durga Lal Kirar, a Congress worker, took a vow of his own -- not to wear shoes until the Congress returns to power in the state.

And for 15 years, Mr Kirar did not wear shoes, until Wednesday.

With the Congress finally back in power in Madhya Pradesh, Chief Minister Kamal Nath, accompanied by Digvijaya Singh, made Mr Kirar wear his shoes, as a mark of gratitude.

"Today, at the residence, met worker Shri Durga Lal Kirar and made him wear shoes. He had vowed not to wear shoes until the Congress formed government in the state. A big salute to such workers who work day and night for the Congress with complete commitment," the Chief Minister tweeted.

The Congress leadership including its chief Rahul Gandhi was all praise for the workers of the party after the assembly polls wins in the three Hindi heartland states - Madhya Pradesh, Rajasthan, and Chhattisgarh. But, thanking them it seems was not enough for Kamal Nath, who walked an extra mile.

The Congress won the election in Madhya Pradesh but was two seats shy of a simple majority and was helped by Mayawati's BSP and the Samajwadi Party that supported the government from the outside.

While the Congress got a thumping majority in Chhattisgarh, the party barely hit the majority mark in Rajasthan. The party's face in the desert state, Sachin Pilot, had also vowed that he would not wear the traditional turban until his party comes to power. While he got to wear the turban eventually, he lost in the chief ministerial race to party veteran Ashok Gehlot.

"Heroic Effort": US Defense Secretary On Covid Assistance To India