Kamal Nath's nephew and niece were given the VIP treatment when they came for a visit to the famous Mahakaleshwar temple in Ujjain.

At least six cars, including an ambulance and three police escorts, were seen tearing through Madhya Pradesh's Ujjain on Tuesday - all for a temple visit by relatives of Chief Minister Kamal Nath. The Chief Minister has now come under opposition fire which has accused the Congress administration of scandalous misuse of government machinery.

Kamal Nath's nephew and niece were given the VIP treatment when they came for a visit to the famous Mahakaleshwar temple in Ujjain. Before that, they also prayed at the Mangalnath temple for half an hour - accompanied by an elaborate entourage of police officers and government officials.

As the controversy swelled, the local administration responded, saying all services had been paid for by the visitors. "Standard rates are fixed for every private plane which lands at the city's airstrip and associated security and other facilities too are provided on payment basis. The visitors have duly paid for all the services," Ujjain Superintendent of Police Sachin Atulkar said. 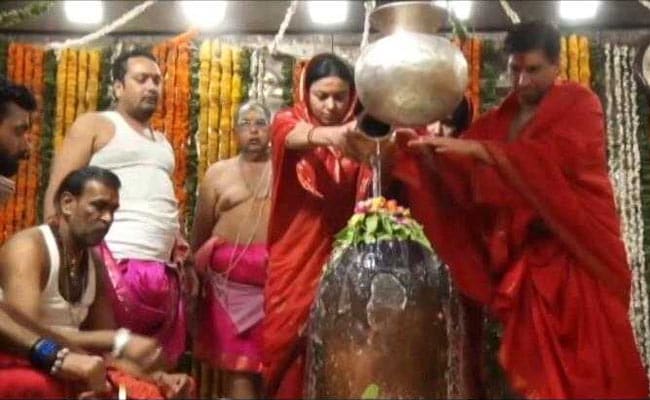 Kamal Nath's relatives prayed at the Mahakaleshwar and Mangalnath temples in Madhya Pradesh.

The resurgent opposition BJP, which scored a stunning sweep in the recently concluded Lok Sabha elections in the state just months after Congress snagged the state with a wafer thin majority in the assembly elections, attacked the state government.

"Kamal Nath's nephew Ratul Puri, who is under the IT lens, was given such kind of treatment in Madhya Pradesh where even patients are not getting ambulance. I think nothing can be more shameful than this," BJP spokesperson Rahul Kothari said.

"Five days ago, Uttar Pradesh Chief Minister Yogi Adityanath came here but they refused to give him such protocol. We will demand from the governor that the cost of the protocol should be deducted from the salary of Kamal Nath," he added.

Congress spokesperson Pankaj Chaturvedi told NDTV that the issue was "some kind of misconception". "The rules that apply to everyone, apply to the chief minister's family as well. I don't think anybody was given any special or VIP facility. But if the local administration decided to give them a certain degree of security, I don't see a problem in that," he said.