Actor Kamal Haasan, who attended HD Kumaraswamy's oath ceremony, said it was a good starting point for dialogue between Karnataka and Tamil Nadu. 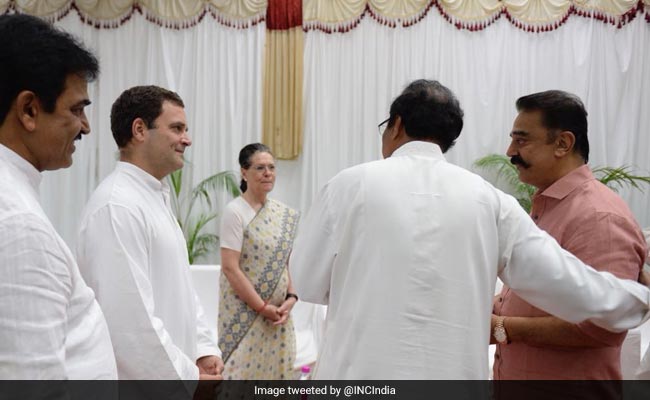 BENGALURU: HD Kumaraswamy's grand swearing-in ceremony that brought the country's most prominent non-BJP leaders on stage afforded actor and newbie-politician Kamal Haasan his first opportunity to register his presence on the canvas of national politics. Mr Haasan, who had recently launched his political outfit Makkal Needhi Maiam in neighbouring Tamil Nadu, said the ceremony also doubled up as a "platform for healthy exchange of views with other leaders".

"Curious to see what follows," Mr Haasan tweeted on his way back from the Bengaluru event that HD Kumaraswamy's Janata Dal Secular, or JDS, hopes, could spur a national coalition against the BJP in the 2019 elections.

It is a hope, Mr Kumaraswamy told reporters later, that had made the "historic" gathering of non-BJP leaders possible.

"The leaders have not come here to support me but to give a message that there will be a big change in 2019," the Karnataka Chief Minister said.

BJP's BS Yeddyurappa has predicted that the JDS-Congress alliance stitched last week in Karnataka would come apart at the seams within three months. His boss Amit Shah had recently given the alliance just a year and brushed aside the hype around the front of non-BJP parties posing any risk to his party.

Promoted
Listen to the latest songs, only on JioSaavn.com
Except the Chandrababu Naidu's TDP, Mr Shah reasoned, none of the parties that seemed to be inclined to join hands to form the front, had supported the BJP in the last election. "So it doesn't change anything," he had explained.

Mr Haasan's cautious sentiment about the coalition of parties also comes against the backdrop of rivalries between parties such as Mamata Banerjee's Trinamool Congress and Sitaram Yechury's CPM that have shown no signs of subsiding. Mr Yechury was dismissive about the prospect of the two rivals joining hands in West Bengal to stop the BJP expanding its footprint.
Comments
Kamal HaasanOpposition UnityHD Kumaraswamy swearing-in Ceremony