K Chandrashekhar Rao expressed his anguish over the Army officer's death and asked the family to contact him whenever they need help. 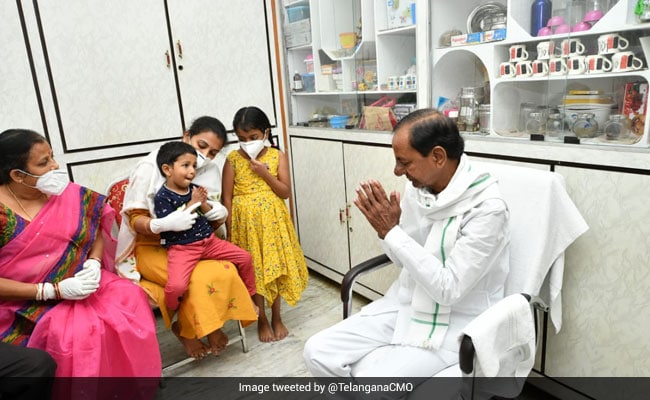 Telangana Chief Minister K Chandrasekhar Rao on Monday visited the family members of Colonel Santosh Babu, who was killed in a violent clash with the Chinese troops in eastern Ladakh's Galwan Valley, and handed over a cheque for Rs 5 crore as compensation to the bereaved family. Mr Rao also pledged his government's full support to the family.

K Chandrasekhar Rao met the family members at their residence at Suryapet town, about 130 kms from Hyderabad, consoled them and hailed the supreme sacrifice of Col Santosh Babu in the service of the nation besides handing over the appointment letter to his wife for a top ranking state government job, an official release said.

The 39-year old colonel was among 20 Indian soldiers who were killed in the Galwan Valley in eastern Ladakh on June 15 during a violent clash with Chinese troops in the biggest military confrontation in over five decades.

Soon after reaching the house of Col Santosh Babu, Mr Rao paid floral tributes to a portrait of the officer and consoled his wife Santoshi, parents Upender and Manjula and others, the release said. He also spoke to the colonel's young children, it said.

Mr Rao expressed his anguish over the Army officer's death and assured to stand by the family as he told them they can contact him whenever they needed any help.

He personally handed over a letter appointing Santoshi as a Group I service officer in the state government and documents allotting a house site of 711 sq yards at the Banjara Hills, the release said.

Talking to reporters later, Santoshi thanked the chief minister for the financial support and said the state government has given her the choice of choosing a department to take up a job in the Group I cadre, the top rank in the state service.

She also thanked Mr Rao and the state government for announcing financial assistance of Rs 10 lakh each to the families of the 19 other jawans who were killed in the clashes with Chinese troops.

Energy Minister G Jagadeesh Reddy, who hails from Suryapet, accompanied Mr Rao during the visit and said a bronze statue of the officer will be installed in his home town.

The colonel's mother said Mr Rao's visit to their residence gave them courage and thanked him for his support.