BJP's Welcome Posters For Jyotiraditya Scindia Taken Down In Bhopal

A grand welcome has been planned for Jyotiraditya Scindia and the BJP had put up several posters and banners across Bhopal to welcome him. 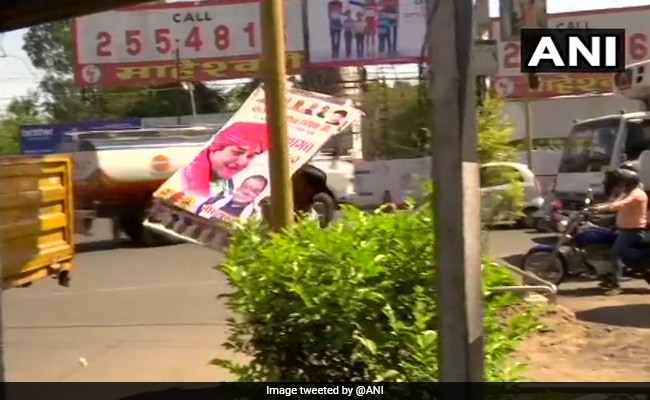 The BJP had put up several banners across Bhopal to welcome Jyotiraditya Scindia.

A day after he joined the BJP, posters of Jyotiraditya Scindia in Bhopal - put up by the BJP - were removed by the city's municipal body.

Mr Scindia is expected to reach the Madhya Pradesh capital this evening. A grand welcome has been planned for the newly-inducted, high-profile member and the BJP had put up several posters and banners across the city to welcome Mr Scindia.

The posters feature the former Congress leader along with Prime Minister Narendra Modi, Union Home Minister Amit Shah and BJP chief JP Nadda. However, Mr Scindia's face was blackened in some of the posters by unknown persons.

Jyotiraditya Scindia, who was welcomed into the BJP by Mr Nadda at the party headquarters on Wednesday, will reach the Madhya Pradesh BJP office after a road show from the airport. At the party office, he is expected to garland the statues of Deendayal Upadhyay, his grandmother Vijayaraje Scindia, Kushabhau Thackeray and the portrait of his father, Madhavrao Scindia.

Mr Scindia, 49, quit the Congress on the day of Holi, ending his 18-year association with the Congress. Shortly after joining the BJP on Wednesday, he was named by the party for one of the two Rajya Sabha seats from Madhya Pradesh due for elections later this month. He will file his nomination for the Rajya Sabha polls tomorrow.

He had praised PM Modi on Wednesday afternoon after joining the BJP, saying the "the country is safe in his hands".

"It's not just a turning point in my life, but also an opportunity for me to continue my commitment towards public service under the inspirational leadership of PM Modi-ji," he wrote in a post-midnight tweet.

His exit from the Congress along with 21 Madhya Pradesh MLAs endangers the Congress in a major state where it had come to power just 15 months ago. The Congress, along with Bahujan Samaj Party, Samajwadi Party and independents, has 120 MLAs in Madhya Pradesh, four more than the majority mark of 116 in the 230-member assembly. If the 21 resignations are accepted, the majority mark will fall to 104. This will make it easier for the BJP - with 107 MLAs - to stake claim to power.