Just Married. At 88, ND Tiwari is a Bridegroom 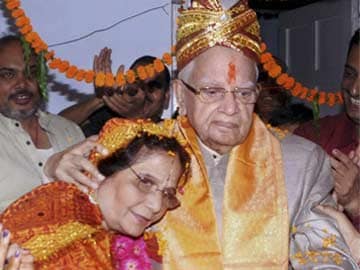 Veteran Congress leader ND Tiwari (89) gets married to Ujjwala Sharma, mother of his biological son Rohit Shekhar at a simple ceremony at his residence

Lucknow: Congress leader ND Tiwari has married Ujjwala Sharma, the woman whose son he recently accepted as his own after a lengthy lawsuit.

Rohit Shekhar, 32, had taken the politician to court after Mr Tiwari had refused to acknowledge their biological relationship.

In March, Mr Tiwari publicly accepted Mr Shekhar is his son. (I accept that he is my son: ND Tiwari on Rohit Shekhar, who took him to court in paternity battle)

"I'm very happy, Tiwari ji suggested the marriage, it was a low-profile event," Ujjwala Sharma told reporters after the wedding.

In 2012, the Congressman, who had resisted submitting blood samples for a DNA test, was ordered to cooperate by the Supreme Court. (At ND Tiwari's home, blood sample collected under pressure)

Promoted
Listen to the latest songs, only on JioSaavn.com
The Delhi High Court then ruled that DNA tests proved that Mr Tiwari had fathered Mr Shekhar.

Mr Shekhar was reportedly among the guests present at the wedding that took place this morning in Lucknow.