The BJP has given tickets to 18 women candidates as against 12 in 2017, while the Congress has fielded 14 women, although that figure was 10 in the last Assembly election. 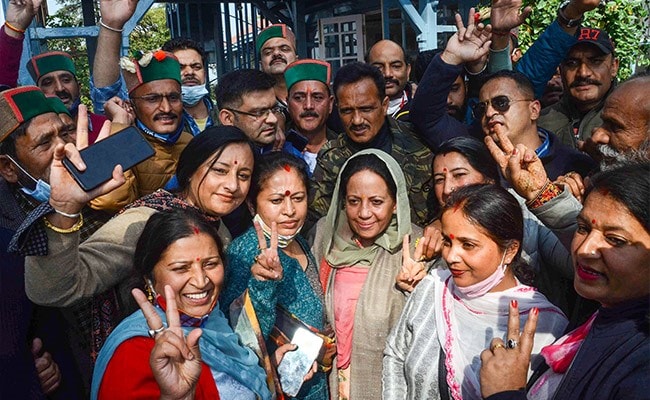 Even as women account for nearly 50 per cent of voters in Gujarat, the number of female candidates contesting the next month's Assembly elections is not very encouraging as only 139 of them are in the contest out of as many as 1,621 contenders for 182 seats.

The ruling Bharatiya Janata Party (BJP) and the opposition Congress have continued their tradition of offering tickets to only a handful of women, but still the number of such candidates fielded by them this time is more as compared to what it was in the 2017 election.

The BJP has given tickets to 18 women candidates as against 12 in 2017, while the Congress has fielded 14 women, although that figure was 10 in the last Assembly election. The two parties have also accommodated more number of women candidates from Dalit and tribal communities this time.

Congress candidate from Sayajigunj seat in Vadodara, Ami Ravat, said the representation of women will rise when the bill providing 33 per cent reservation to women is passed in the parliament, while BJP's state women wing head Dipikaben Sarvada said her party was already doing it by giving key posts, including that of president, to women.

As per the data made available by the Election Commission, there are a total of 1,621 candidates contesting next month's Gujarat elections to be held in two phases - on December 1 and 5. Of them, 139 are women candidates, with 56 of them contesting as independents.

In 2017, there were 126 women candidates out of the total 1,828 contestants. That year, Gujarat sent 13 women candidates to the Assembly. This included nine from BJP and four from Congress. As many as 104 women contestants had their security deposit forfeited, the EC data showed.

Talking to PTI over phone, Congress's Mr Ravat said, "Our party has tabled in Parliament the bill for 33 per cent reservation for women, which the BJP did not accept. Congress involved women in India's independence struggle at a time when they did not come out of their homes." Even in developed countries, women had to fight for their voting rights, she said.

BJP's Ms Sarvada said the way BJP has given representation to women at every level shows the party is serious about their welfare.

"Today, 18 of our sisters have got an opportunity to contest the election, and they will get a chance to be in the state cabinet in the coming days. One of them will become minister of women and child development," she said.

Ms
Sarvada said that it is only the BJP which will work to give more representation to women in the coming times.

She said Congress's demand for 33 per cent reservation for women in assemblies and Lok Sabha will be injustice to male party workers.

"The number of male party workers is more, and they should get a proper chance. So this kind of reservation is not necessary," she said.

Among other parties, the Aam Aadmi Party (AAP) which fielded its candidates on all 182 - of whom one candidate withdrew from the race - has given tickets to only six women candidates and three of them are contesting on Scheduled Tribe (ST)-reserved seats.

The All India Majlis-E-Ittehadul Muslimeen (AIMIM), which is contesting on 13 seats, has given tickets to two women, including one from the Muslim and another from the Dalit community. It has fielded Zainabbibi Shaikh from Vejalpur and Kaushikaben Parmar from Danilimda. Both the seats are in Ahmedabad city.

The Bahujan Samaj Party (BSP) has fielded 13 women candidates for the upcoming polls. It is fighting 101 seats.

The BJP has dropped five out of nine sitting women MLAs and repeated four of them - Malti Maheshwari from Scheduled Caste (SC)-reserved Gandhidham, Gita Jadeja from Gondal, Sangita Patil from Asarwa, and Manisha Vakil from SC-reserved Vadodara City seats.

The Congress, on the other hand, has repeated two of its four women MLAs. Asha Patel, who had won as a Congress candidate from Unjha and later defected to the BJP, died due to health complications.

The candidates repeated by the Congress are Geniben Thakor from Vav and Chandrika Baria from ST-reserved seat of Garbada.

In a positive move, both the parties have fielded more Dalit and Tribal women candidates on reserved constituencies this time as compared to 2017.

As against two women on SC-reserved seats and one on ST-reserved seats in 2017, the BJP has fielded four and two, respectively, for the upcoming elections.

In Morva Hadaf, an ST-reserved seat, the principal contestants from BJP and Congress are women.

Among the national parties, the Communist Party of India (Marxist) has also given the ticket to a woman candidate.

The BJP has fielded cricketer Ravindra Jadeja's wife Rivaba from Jamnagar North, and Payal Kukrani, who is the daughter of Naroda Patiya riots case convict Manoj Kukrani, from Naroda seat. The Congress has given tickets to four women candidates on ST-reserved seats - Dediapada, Morva Hadaf, Mahuva, and Garbada, and one from SC-reserved Bardoli.

Limbdi, Karanj, Ghatlodia, Sayajigunj, Manjalpur, Pardi, Vav, Naranpura, and Godhra are some other seats from where women are contesting as grand old party's candidates.

The AAP has fielded three women candidates from ST-reserved seats- Jhagadia, Jetpur, and Mandvi. It has also fielded women from Gondal, Una, and Talaja.