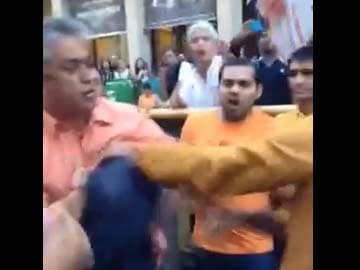 New York: Senior journalist Rajdeep Sardesai was heckled and then found himself in a brawl on Sunday near Madison Square Garden by a group gathered to support Prime Minister Narendra Modi, before the leader arrived at the venue to address Indian Americans.

Mr Sardesai tweeted, "Glad we caught the idiots on cam. Only way to shame the mob is to show them."

Great crowd at Modison square garden! except a few idiots who still believe abuse is a way of proving their machismo! #ModiAtMadison

Reporting on the online conflict over the different version, a story in the New York Times writes of Sunday's brawl, "Within minutes, after a crowd of Modi supporters had turned on him - apparently because of his failure to share their enthusiasm for Mr Modi - Mr Sardesai found himself in a strange clash of his own, exchanging pushes, insults and misdirected slaps with a man who had harassed him during his live report. (Read the full story here)

Promoted
Listen to the latest songs, only on JioSaavn.com
After the videos posted by his critics, Mr Sardesai tweeted:

First, Kick and abuse while I am on cam asking questions, then release video selectively. Rule of the mob.