Joe Biden Oath Ceremony: India Timing, How To Watch And All Other Details

The Inauguration will take place amid a deadly coronavirus pandemic that has infected over 2.4 crores Americans and killed 3.9 lakh patients so far. 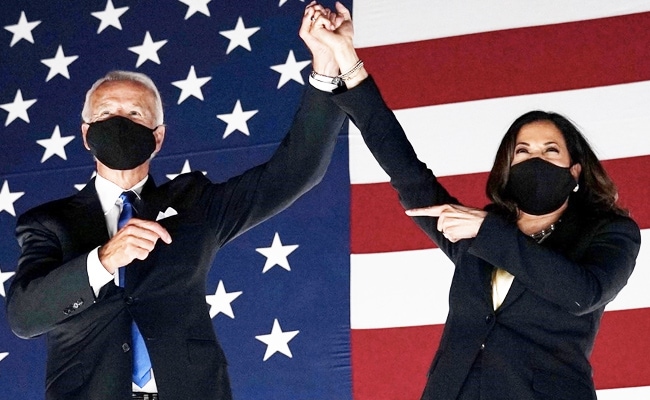 US President-elect Joe Biden and his deputy Kamala Harris will be sworn in as the 46th President and 49th Vice-President of the United States today, January 20. Ms Harris will make history as America's first woman, first Black and first person with south Asian roots to take the office of the Vice President.

Joe Biden, 78, will take the oath on his 127-year-old family Bible, which will be held by his wife, Dr Jill Biden, news agency PTI reported.

The Inauguration will take place amid a deadly coronavirus pandemic that has infected over 2.4 crores Americans and killed 3.9 lakh patients so far. The ceremony comes days after an unprecedented storming of the US Capitol building, which is the seat of the US Congress, by pro-Trump supporters who took over the building, leading to the evacuation and lockdown of the Capitol and five deaths.

Joe Biden and Kamala Harris will be sworn in on the West front of the US Capitol building, the official Inauguration website has announced. "After they take their oaths of office, President-elect Biden will deliver an inaugural address laying out his vision to defeat the pandemic, build back better, and unify and heal the nation," it said.

All you need to know about Biden-Harris Inauguration today:

The Inaugural ceremony will begin with an invocation and the singing of the national anthem at 8:30 pm today. The ceremony will also include the Pledge of Allegiance, poetry reading, musical performances and a benediction ceremony. Biden and Harris will be sworn in keeping in mind the pandemic situation and the "top priority will be keeping people safe and healthy while honoring and resembling American inaugural traditions", the office website bideninaugural.com said.

Officials have urged Americans to refrain from traveling to Washington for the oath taking ceremony. The ceremony will be streamed on all major US news networks and on bideninaugural.com. The ceremony can also be viewed on YouTube, Facebook, Twitter, and Twitch along with on Amazon Prime Video, Microsoft Bing, NewsNOW from Fox, AT&T U-verse (Channel 212/1212 in SD/HD) and AT&T DIRECTV (Channel 201).

Since the Inauguration will take place amid a raging pandemic, inaugural activities will have limited footprints, bideninaugural.com said. The "Parade Across America," which will be televised for the American people and feature diverse, dynamic performances will feature actor and political activist Tony Goldwyn, comedian Jon Stewart, rock band New Radicals, singer and song writer Andra Day, Olympic athletes, and everyday American heroes.

Following the swearing in ceremony, the President-elect, First Lady, Vice President-elect, and Second Gentleman will take part in a "Pass in Review" on the East front with members of the military, the official website said. Pass in Reviews are a long-standing military tradition that reflect the peaceful transfer of power to a new Commander-in-Chief, it said.

Joe Biden, Dr Jill Biden, Kamala Harris and her husband Doug Emhoff will visit the Arlington National Cemetery to lay a wreath at the Tomb of the Unknown Soldier, the official website said. They will be joined by President Barack Obama and Michelle Obama, President George W Bush and Laura Bush, and President Bill Clinton and Secretary Hillary Clinton.

Joe Biden will receive a "Presidential Escort" from 15th Street to the White House with each branch of the military represented in the escort, including The US Army Band, a Joint Service Honor Guard, and the Commander-in-Chief's Guard and Fife and Drum Corps from the 3rd US Infantry "The Old Guard", the website said.