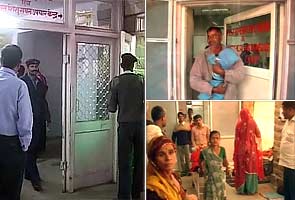 Jodhpur: Heads have finally begun to roll in connection with the maternal deaths in a Jodhpur hospital allegedly due to contaminated intravenous fluids.

The Rajasthan government has suspended three senior doctors at the Umaid Hospital after eighteen women died in the span of three weeks.

The deceased were allegedly administered spurious glucose that was supplied by an Indore-based company, Parental Surgical (India) Ltd.

Of the 18 women, 15 had died at the Umaid Hospital after complications that arose during or after their deliveries at the hospital. The hospital has become notorious for a string of maternal deaths due to alleged medical negligence.

Between the state, Centre and the hospital, five different inquiries were trying to determine what went wrong.

Samples of IV fluid had also been sent to the Central Drug Research Laboratory in Kolkata for testing, in which one of the samples was found to be contaminated.

The test report from the Kolkata-based laboratory was received on Monday by the state government which says that one out of three samples of three batches of IV fluid - OD 0077 - was found to be non-sterile and containing bacterial endotoxins.

The other two samples of the batches of ID 0002 and 0007 were declared as standard, an official of state medical and health department said on Monday night.

The Rajasthan High Court's Jodhpur Bench had also pulled up the police for inaction in the case.

It's not just mothers who died. Five babies were stillborn and one was premature. But of the nine children who survived, many are at risk without their mothers to take care of them.

There is no doubt, say many experts, including a committee of doctors who conducted an internal inquiry at Umaid Hospital that severe medical negligence contributed to the rash of deaths.

Umaid Hospital is a government hospital, which means it sees a huge rush of patients every day. Last year, the number of deliveries shot up from 40% to 70% of the operations performed here - the result, doctors say, of a government scheme that pays women close to Rs 2000 if they deliver at a hospital instead of at home. In 2010, there were 20,600 deliveries at the operating theatre. That's almost 50 births per day in this 700-bed hospital. Given the rush, basics like fumigating operating theatres to ensure they're sanitised are often overlooked as there just isn't time.