Aishe Ghosh's remarks came against the backdrop of a video surfacing on the Internet purportedly showing JNUSU vice-president Saket Moon demanding reconstruction of Babri Masjid during a protest. 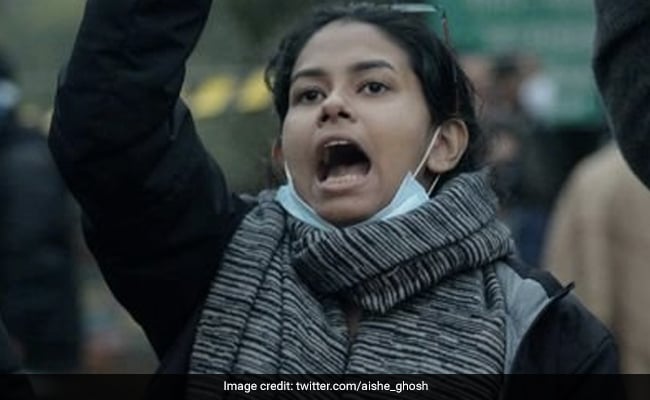 JNU Students' Union president Aishe Ghosh on Tuesday accused the right-wing forces of "distorting speeches" of the students' body members and said it will keep protesting against fundamentalist forces.

Her remarks came against the backdrop of a video surfacing on the Internet purportedly showing JNUSU vice-president Saket Moon demanding reconstruction of Babri Masjid during a protest.

The JNUSU had organised a harmony march on Monday night to commemorate the death anniversary of BR Ambedkar and to mark the demolition of Babri Masjid.

In the video of the march, Mr Moon can be purportedly heard saying, "Compensation has to be awarded. It has to be accepted that the demolition of Babri Masjid was wrong and it should be reconstructed."

The remark heard in the video has triggered criticism from various quarters.

BJP leader Kapil Mishra, in a video uploaded on Twitter, said that "those who want Babri Masjid to be reconstructed have a toxic mindset".

However, JNUSU president Aishe Ghosh tweeted, "Distortion of our speeches is not going to change the fact that the right-wing forces RSS/BJP/VHP assaulted the secular fabric of this country. JNUSU will keep protesting against such fundamentalist forces who disturb the communal harmony in the country or elsewhere."

Satish Chandra Yadav, general secretary of JNUSU, said, "The JNUSU did not raise the demand. He had talked about how the court has accepted that the demolition of Babri Masjid was wrong and had said that it should be constructed again."

There was no immediate reaction from the university.

Taking to Twitter, Mr Moon claimed that a section of his speech "was being circulated by RSS-BJP affiliates on social media, with the usual claims of anti-national activities. However, the complete video of the speech shall clarify matters further."

He said that he had started a public petition to the Chief Justice of India over the Babri Masjid demolition a year ago. Sharing the petition, he said that "it clarifies and reflects the position I still hold and have articulated".

The petition stated, "We the undersigned citizens of India are deeply distressed by the inordinate delay in justice for the wanton destruction of the Babri Masjid in December 1992."

"The Supreme Court verdict on the title for the disputed land in Ayodhya delivered on November 9, 2019, had also observed: "The damage to the mosque in 1934, its desecration in 1949 leading to the ouster of the Muslims and the eventual destruction on 6 December 1992 constituted a serious violation of the rule of law," it read.

"It is most unfortunate that while such a serious violation of the rule of law is yet to be remedied by the courts, the construction of a new temple at the site where the mosque once stood has commenced with a nationally televised ceremony on August 5, 2020, with the Prime Minister of the country in attendance," the petition added.

It stated that further delay in the trial would "irreparably impair the course of justice". "We appeal to the Supreme Court to ensure that justice is done without any further postponement, which should include reconstruction of the mosque at an appropriate site and full recovery of damages from the culprits of the demolition," it read.

Mr Moon said in a tweet, "It is clear that through inordinate delay, justice has been delayed and denied to those that suffered 29 years ago. This is also a reason that communal forces today have begun a similar campaign in Kashi and Mathura with impunity."

The JNUSU had screened the documentary 'Ram Ke Naam' on Saturday night despite the university administration's apprehensions that "such an unauthorised activity may disturb communal harmony and peaceful environment" of the campus.