In the over two-hour meeting, the Jawaharlal Nehru University Teachers'' Association (JNUTA) Executive Committee said the "recurrent problems arising from the way JNU is being governed is impossible to address while the current vice-chancellor continues in office". 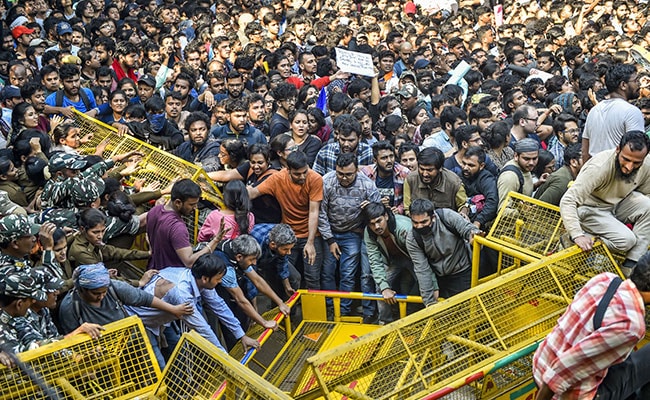 The JNU Teachers' Association (JNUTA) met the HRD Ministry-appointed high-powered committee on Thursday and demanded complete roll- back of the hiked hostel fee and removal of the university vice-chancellor.

In the over two-hour meeting, the Jawaharlal Nehru University Teachers' Association (JNUTA) Executive Committee said the "recurrent problems arising from the way JNU is being governed is impossible to address while the current vice-chancellor continues in office".

In a statement, the 13 JNUTA representatives said they informed the three-member committee that the present crisis is "the culmination of misgovernance of the university since the present Vice-Chancellor M Jagadesh Kumar took office".

The teachers' association also informed the panel about how the current vice-chancellor has been "violating" the JNU Act and has "put the future of the university at stake".

"The VC is guilty of having compromised the university's autonomy and sought to run the administration in an authoritarian manner, and his continuation stands in the way of restoring normalcy in JNU," the statement said.

The JNUTA said it has apprised the HRD Ministry-appointed panel about the "details of mismanagement, neglect of academic spending in favour of a manifold increase in spending on non-academic heads (such as security, the outsourcing of the JNU entrance examination), massive seat cut, repeated violations of reservation policies, and lack of transparency in JNU governance".

"We outlined the ways in which the present administration was being run by cronyism, where established practices in appointments of deans and chairpersons have been set aside so that individuals of the VC's choice may be installed in all decision-making bodies of the university," they said.

The JNUTA said it told the committee that there is no possibility of normalcy being restored on the JNU campus unless the hike in hostel charges is withdrawn.

It also said, "The impasse over the hostel fee hike has been created by the current administration to legitimise their wasteful expenditure and financial mismanagement."

The JNUTA members also submitted a memorandum to the committee.

Students of JNU clashed with police on Monday after they were stopped from marching to Parliament against a hostel fee hike, paralysing traffic and bringing the city to a halt. Thousands of students from different universities across the national capital had joined the protest march called by Jawaharlal Nehru University (JNU) students against the recent fee hike against which an agitation has been going on for over three weeks.