Hemant Soren was paying tributes to Stan Swamy, a Jesuit priest, who spent long years working among tribals in Jharkhand and died on July 5 in Mumbai, hours before his appeal for bail was to be heard. 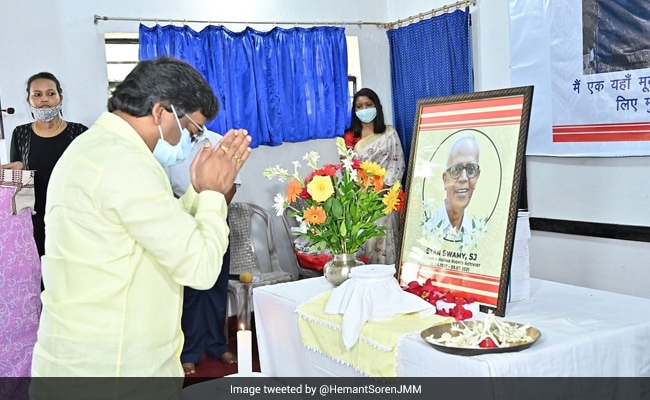 Jharkhand has never lagged behind when it comes to making sacrifices be it tribal icon Birsa Munda or Father Stan Swamy and they will be remembered for their invaluable contribution to the society, Chief Minister Hemant Soren said on Thursday.

Mr Soren was paying tributes to Stan Swamy, a Jesuit priest, who spent long years working among tribals in Jharkhand and died on July 5 in Mumbai, hours before his appeal for bail was to be heard.

Mr Soren said the next generation will draw inspiration from the life of Stan Swamy who always remained sensitive to the cause of the Dalits, the deprived and the tribal society.

"Had a personal meeting with Father Stan Swamy. It was not known then that he has been drawing an indelible mark in his life time.... His life was not easy. And he was not an ordinary person either.

"During his lifespan he showed way to the people and impressions of work done by people of such stature never fades," he said.

Mr Soren was addressing a memorial meeting at Namkum to pay respect to Swamy.

Mr Soren said his government was committed to work for the upliftment of the deprived and the tribals and urged people to come forward to work in this direction in a concerted manner.

A large number of people were present on the occasion including Arch Bishop Ranchi, Theodore Mascarenhas, Auxiliary Bishop Telosfer Billung and representatives of other organisations.

The chief minister after the death of the priest had in a tweet alleged that the Central Government should be held accountable for the absolute apathy towards Stan Swamy.

"Shocked to learn about the demise of Father Stan Swamy. He dedicated his life working for tribal rights. I had strongly opposed his arrest & incarceration. The Union government should be answerable for absolute apathy and non provision of timely medical services, leading to his death," Mr Soren had said.

Stan Swamy had worked for about three decades among tribals in Jharkhand.

New Post For Kashmir's Shah Faesal, Back To Civil Service After Politics