Jharkhand Elections 2019: The polling will take place 7 am to 3 pm in 18 seats while two seats - East Jamshedpur and West Jamshedpur - will go to the polls from 7 am to 5 pm.

Jharkhand Assembly Elections: The BJP is seeking a second term in this election.

Jharkhand voted today in the second phase of the assembly election. Polling in 20 seats begun at 7 am. Among the key contestants are Chief Minister Raghubar Das of the BJP, who is contesting against former cabinet colleague Saryu Rai and Congress spokesperson Gaurabh Vallabh in Jamshedpur East. Prime Minister Narendra Modi tweeted urging voters to come out in large numbers to exercise their franchise.

A voter turnout of 63.36 per cent was recorded in the second phase of voting.

Out of a total of 6,066 polling stations, 949 have been declared ''critical'' and 762 'sensitive'' in Maoist-affected areas, Jharkhand Chief Electoral Officer Vinay Kumar Choubey said. "Several of the constituencies going for this phase of polling are Maoist-affected. So, armed police have been deployed as a part of security measures," he said.

In Jharkhand, the BJP is seeking a second term under the leadership of Chief Minister Raghubar Das. The party faces a tough challenge from the JMM-Congress alliance and Lalu Yadav's Rashtriya Janata Dal (RJD). The RJD, which has got a total seven seats as per the seat-sharing formula of the three opposition parties, has no candidate in this round.

The second phase of voting is crucial for the ruling BJP as in some seats, it faces contest from its former ally All Jharkhand Students Union (AJSU). Tribal voters are upset with the BJP for fielding Chief Minister Dar, a non-tribal. The first two Chief Ministers of Jharkhand -  Babulal Marandi and Arjun Munda -  were from the tribal community.

In the first round of polling last Saturday, a bridge in Bishnupur in Gumla district was blown up by Maoists. No one was injured in the incident.

This is the fourth assembly election in Jharkhand since 2000 when the state was carved out of Bihar.

Around 48 lakh voters, including over 23 lakh women and 90 third gender voters, are eligible to cast their vote in the first phase.

Jharkhand, which has an 81-member assembly, is voting in five phases till December 20. Counting of votes will take place on December 23. 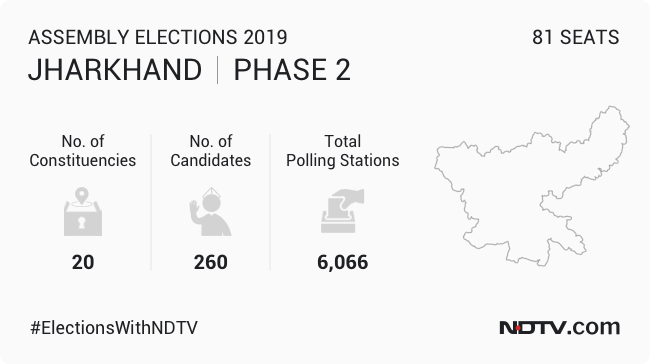